Over Mother's Day weekend, I wrote my own Breakoutedu.  If you haven't heard about breakoutedu, you can learn more at breakoutedu.com

I loved the creative process.  I blogged about it here.  I won't lie.  It is a ton of work.  It is for my accelerated Algebra 2 classes which is a mix of sophomores and juniors.  It was a review of the entire course - systems of equations, absolute value, desmos, polynomial graphing, trig graphing, solving trig.  I think it paid off though.  I did it in my period 3 class on Friday, during lunch blog in 90 degree weather and had the students engaged for 45 minutes!  I will do it again with my period 6 class on Tuesday and I can't wait.

Here are a few things I noticed.  In both classes, I happened to have an even amount of boys and girls so that is how I split the class.  I made two big groups of tables for them to work at.  They liked the room set up this way. 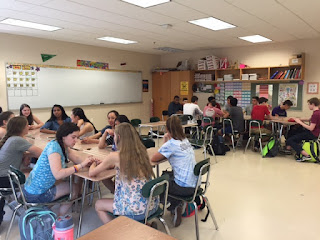 I tried to build up to it all week, but just mentioning "On Friday, we will do a breakout."  "What is a breakout?" Me: "You will find out on Friday."  So, then were anticipating something different.

I only gave them minimal directions to get started.  I reminded them that I did put a lot of time and money into designing it and please don't break my boxes or locks.  And, please don't sabotage it for the other team.  Normally, Breakout is everyone trying to work together to breakout of one box, but I thought 24 kids was too many, so I did two teams of 12 which was the perfect number.  Also key to Breakout is the time is 45 minutes.  They have their own timer on youtube with the logo, timer, and some classical-ish type music.  I explained that Breakout came from the idea of Escape Rooms but we were going to try to breakout of the box by undoing 5 locks. Each group had 2 boxes - one with one lock and the other with 4 locks.  I had a padlock with a key, a 3 number lock, a directional lock (up, down, right, left type), a 5 letter/number lock, and a 3 letter lock.

I gave each team one big envelope that had 3 envelopes and 3 clues in it and they got to work.  The box with the one lock on it has some important things inside it they will need to be able to complete the other clues.  It was supposed to be the easiest clue and I knew both teams were in trouble when they were getting it quickly enough.  The boys were in in about 11 minutes and the girls about 18 minutes.  The teams were monitoring the other team for their progress so that was an added part of competition.

I did have two boys who were absent for the math test prior to this, so they decided to use their time to study.  So, out of the 12 boys, about 4 didn't really participate. The other two were mostly just watching and commenting, but not really doing much.  The girls team was involved the entire team.  They would try something and if they got stuck, they past it off to somebody else.  I did notice some of the quieter girls taking the lead because they are competitive.  It was great to see this side of them.

The girls got the next lock off and pulled into the lead.  In the end, neither group broke out.  Other teachers have done some in our school and no one broke out either.  I was really hopeful.  We had this class during block period, which is 60 minutes, then break for lunch, then come back to class for 20 minutes. When their 45 minutes were up and they didn't breakout, they asked if they could keep working.  I said of course, so the girls hung in there.  A few of the boys continued but most were hungry for lunch at this point.  When I came back from lunch, the girls were still working hard, persevering.  The boys were done.  They didn't want to continue.  They were watching the girls to see if they could get their last lock off (the girls had 1 lock left, the boys had 2).

Literally, at the bell, there was a huge cheer and the girls brokeout!  Yeah!  They got the surprise inside but they needed to clean up.  I didn't get a chance to take a group picture.  The boys were circling like seagulls trying to get one of their treats but I told them no.  The girls persevered and their work paid off.

Here are the boys and girls working:  I did like how they were up and moving in order to work together and figure things out.  Be sure to view the videos below: 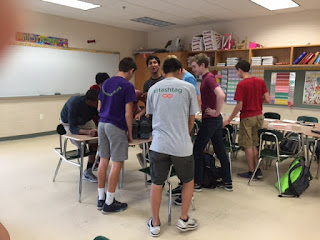 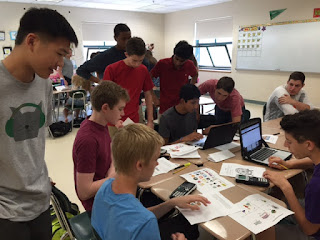 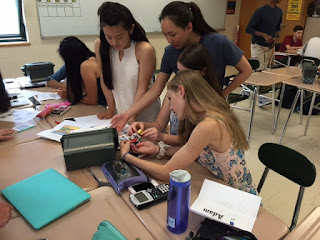 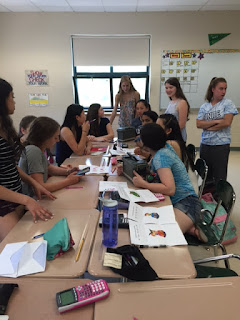 I love hearing them all discuss math and I love that you can hear the music in the background of the boys' video.


Thanks for reading.  Stayed tuned tomorrow when I blog about the responses to my Breakout google doc survey on the activity.....To Be Continued....
Posted by JFairbanks at 8:50 AM