Oh exponents are killing us!  My Algebra I C2 class just cannot get it.  I thought exponents would be a nice break from lines, lines, and more lines, but they are really struggling with the exponent rules.  We started the first day with no rules, just expand it out and figure out what is happening.  They got it.  Next day, introduce the rules, slowly, over 3 days.  Review, quiz, tank.  Ugh!  Then I told them, you got it when we did it the first day, the rules messed you up, so go back to expanding it out.  Nope, they won't do it.  It is frustrating.  So, I gave them three smaller exponent quizzes each day before we began our lessons on exponential growth and decay (which they are doing well with so far).  Each day I would review the previous small quiz and give another, but still no progress.  I told them it is because between days they aren't doing anything about it.  They aren't practicing.  They aren't coming for extra help.  So, why should I think they will magically get it.

Anyways, that is the frustrating part.  The good part is I found a new review activity that I love.  Again, I can't remember whose blog I found it on to give them credit, so please comment and let me know if you know who the creator is.  It is NOT me!  I know there was a skeleton in the graveyard version and this is the timely Eggs in a Basket version:  Eggs in Basket Review ppt  It is in PowerPoint form, but they are essentially just 8 worksheets with space for 4 problems.  It is blank.  You add your own problems so it will work for any review.  The creator said they did increasingly harder on each worksheet.  I kept each worksheet at the same level of difficulty.  I did all of the number 1 questions similar - an exponent problem.  All the number 2s were an exponential growth or decay equation and they had to tell me which it was.  All the number 3s were to graph an exponential growth or decay.  And, finally all numbers 4 questions were exp growth or decay applications.  You guessed it, they got stuck on the number 1s, exponent rules.

The way it works, is the students work in groups to complete the four problems.  I gave each group one colored marker, different colors for each groups.  Once they finished their sheet, they showed me to see if they got it right.  If they did, they got an egg to color with their color.  Then, they decide which place they want the egg to be taped to on the board. They stick it and get back to work.  When reviewing, I like to think about how many problems the students are actually getting to without getting too stuck in logistics of the review game.  This one went better than I anticipated.  There were some groups that did 3 sheets of four questions but most students did about 5 sheets of four questions.  And, they did work together for the most part.  About 5 minutes before the end of class, you tell them time is up.  Then you pick your own eggs with points on them (0, 25, 50, 75, and 100).  You blindly pick and say, this egg is for Central Park.  Then, all the eggs that were taped there get those points.  Pretty cool.

I thought it was going to take us all of block period to do this activity, but going over homework and quizzes took up a lot of the time.  We did this in about 25 minutes.

I will include two pictures here.  One with the eggs and the scores.  And, one where some students wanted to pose.  I asked them not to block the eggs but you can only see one egg. 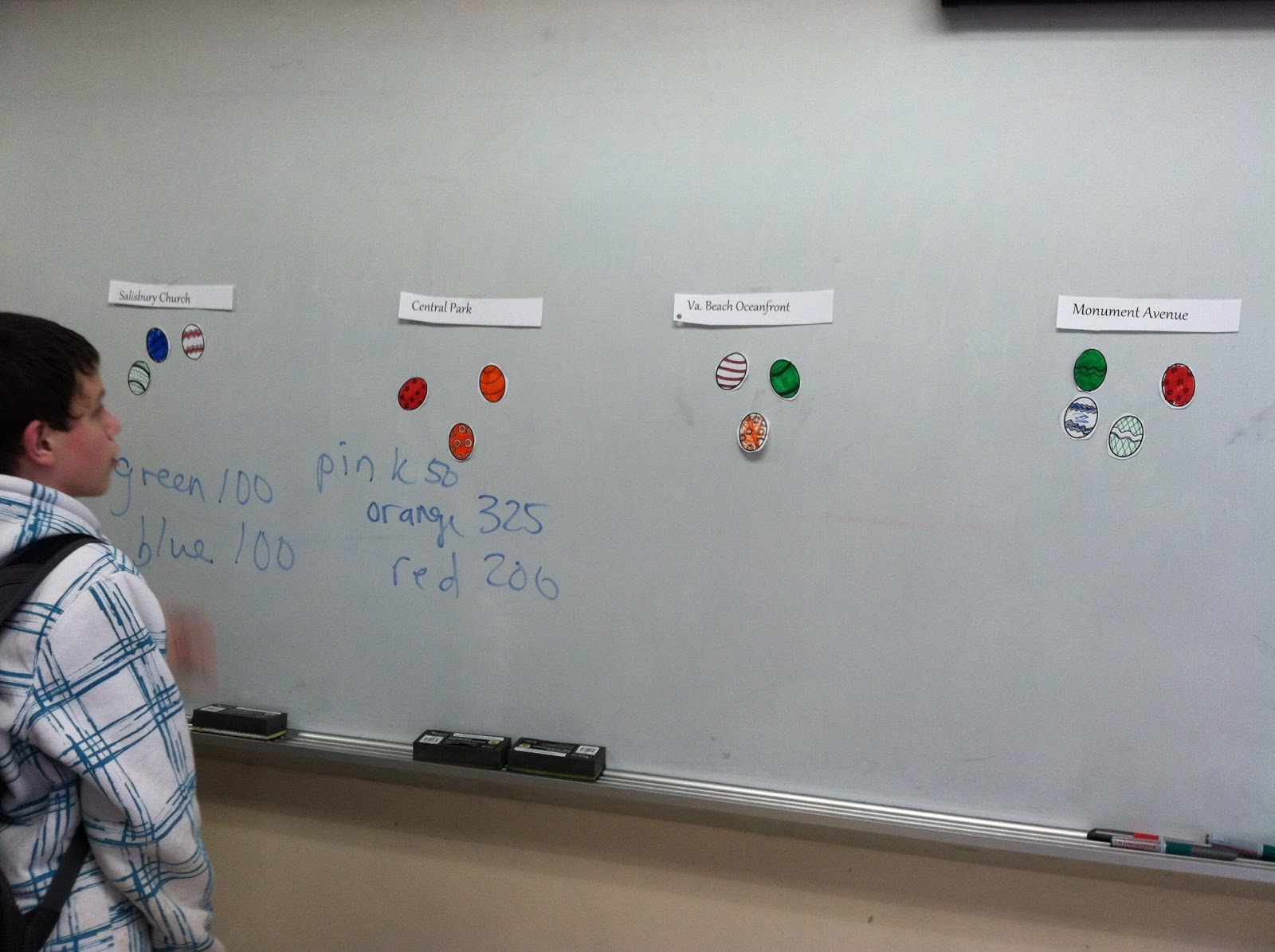 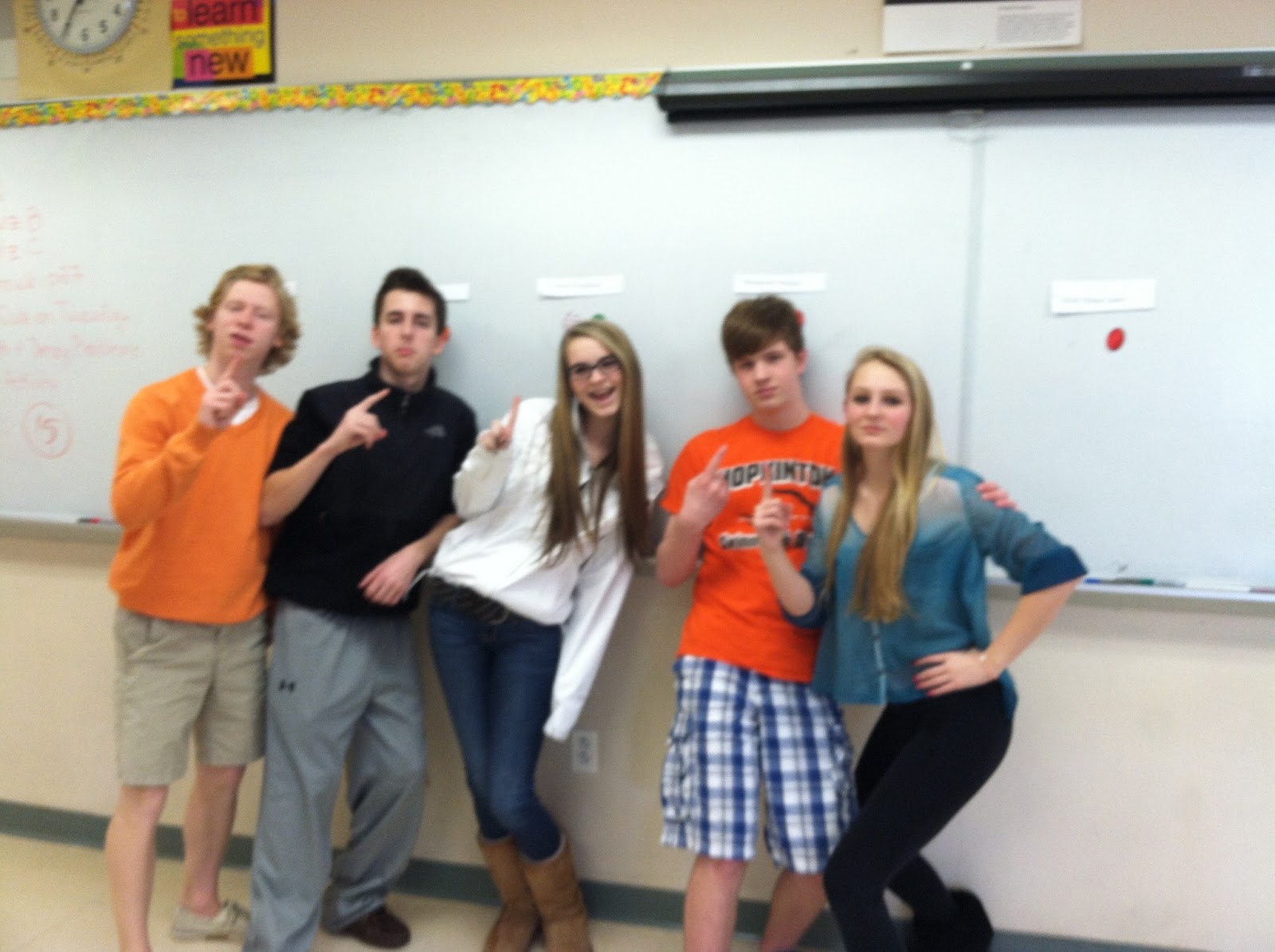