Today was our first day of school.  I have taught Alg 1 and Alg 2 before, so that was good to go.  I am new to teaching Accelerated Geometry and took a stab at repeating what my morning #TMC17 group did with the PCMI teacher group called Rich Tasks - and we dove into a Visual Pattern.  It was not the usual, how many blocks are in Step 43.  Instead, they were asked to fill in the blank - "As the step increases, ______ changes."

I asked them to work individually brainstorming ideas in their notebook.  They thought it was a one and done thing.  I have one word.  I am done.  I asked them to "see" more.  Then, I invited them to turn to their group members and share and grow their list.  Next, I had a big sticky on the board and we recorded all their ideas.  I used questioning techniques to dive deeper into what they were telling me by asking clarifying questions, mostly to have them identify what they meant with their pronoun "it".  Out of this natural geometry vocabulary appeared, area, width, perimeter, side vs edge, vertex vs corner.  It was a great conversation.  They were stuck on the word "block".  They saw the number of "blocks" increasing.  I had to pull some more out of them - I was looking for "squares".  How is the number of squares different from the number of blocks - is it a different thing?  How many rectangles are there?  This lead to the "is a rectangle a square" question and vice versa. 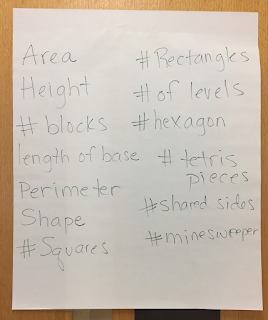 So, I had them brainstorm individually, then in groups, then as a class.  Next, I had my groups of 3 prearranged using flippity.net and invited them up to work at the board #VNPS.  As a group of 3, they were to pick a category and investigate it more fully.

I had two classes.  I was taking a risk.  Yes, I had done this with a group of math geeks (I mean teachers) at TMC, what would my students do, what would they see, how long would it take them.

So, the first class chose "height" and "levels" in their class brainstorming session and then a few groups chose to investigate those which didn't take them too far or too deep.  I adjusted by my second period and while we did include height on our list, I told them they could not investigate it.

They were done a bit sooner than I anticipated.  I had one member from each group grab a pen or pencil and gave them sticky notes and asked them to do a gallery walk and visit some of the other investigations and notice and wonder.  Write down "I notice...", "I wonder...".  They did a good job meandering about the room.  When I noticed each of my 9 groups had about 3 stickies each, I gave a time warning, two more minutes to finish up.  Then, I asked everyone to return to the their seats and give me the rest of the stickies.

At this point, I am adjusting and winging it.  But, it worked out very nicely.  I then invited each group up one at a time to read the stickies and respond accordingly.  They did such a great job.  It really got some great discussion on the first day of school.

Here is some of their work. 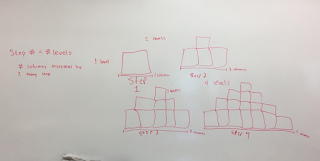 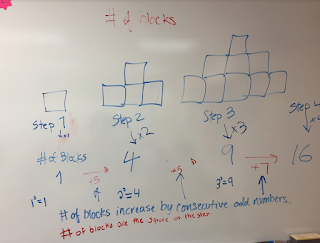 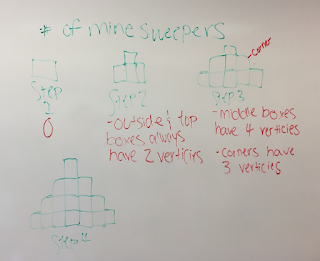 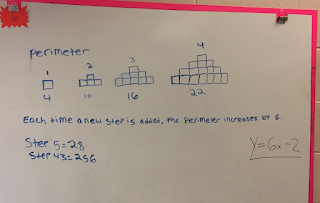 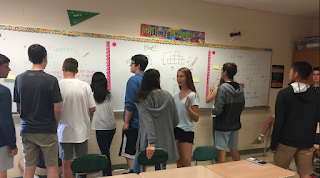 We did some noticing between the groups and decided "levels" and "height" was the same.  "Area" and "number of blocks" were the same.  They were subtracting and finding 1st and second differences.  They were coming up with equations.  We discussed how on one board there might be a linear equation and on another there was a quadratic equation.

In the second class, one group chose number of rectangles (including squares).  They persevered.  They did not get as far as the others with any sort of table or equation.  A student asked me what the equation was.  I was happy to share that was what I investigated at TMC17 and that we spent 2 hours on it and saw a lot of great patterns, but we didn't come up with any equation or conclusions, just kept digging.

Two favorite observations:
"I notice you have a lot of notices."
"I notice the height is the square root of the area."  Nice!

Finally, I asked them to come back to their desks and notebooks and investigate the number of squares, not rectangles, just squares.  We had about 7 minutes at this point, but they were doing it.  They were seeing patterns, and then making predictions without having the draw the whole picture!

Update: Day 2, when I did this with my third class, I realized I heard EVERY Geometry student speak on the first day of school!  My doing the sticky notes, each had to read at least one and maybe answer or comment on it.  They were all heard from.  Wish I could make this happen every day.