Note: Feels funny to talk about Benjamin like this, but here goes:

Last year, at my first TMC, they had a 1st timer's dinner.  We were invited to a great pizza place and told to sit with whomever we wanted.  Kathy @kd5cambell and I jumped in and sat with Connie @chaughland and Sam Shah @samjshah.  We had the coolest dinner.  We were fast friends sharing stories of drive in movie theories, favorite foods, and my favorite - musicals!  Sam recommend us to go see Dear Evan Hansen which wasn't even on Broadway yet.  We went home and bought tickets right away and saw it as soon as it came to Broadway in December.  Great insider tip.  It was amazing!  I will always remember this dinner because it was so fun and welcoming!

This year, TMC went a step further in involving 1st time attendees.  They got to wear a #1 pin made by the thoughtful Sam Shah and they all proudly wore it.  Prior to this TMC, they set up a mentor/mentee program and assigned people.  I was paired up with Benjamin Walker.  We were asked to email them and introduce ourselves in June and to reach out again in July.  Benjamin and I did this.  Just surface talk via email, answering a few questions.  I suggested he look at all the presentations and have some sort of rough plan as to what he might attend because it gets overwhelming.  And, I did highly suggest he narrow down the morning session.  I gave him my cell so he could text when he got there and he had at least one connection.  I was busy touring on Tuesday when Benjamin arrived and he didn't have dinner plans.  I tweeted out and helped him get connected.  He even had 2 dinners that night!!!!!  He was learning fast how powerful the Twitter connections can be. 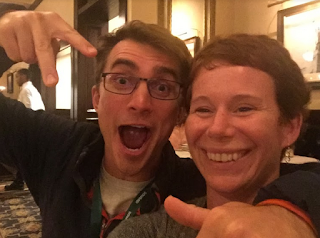 We finally met that night in person as we did that - "do I know you/recognize you/is that you - blind date awkward - kind of thing" and then a big hug!  And, instant friendship!  So fun!

I asked him what his goals were and I can never state them as eloquently as he did but along the lines of discussions in the classroom.  I asked him which morning session he was planning and he said Chris and Mattie's Talk Less, Smile More session.  Perfect!  I attended it last year and they work so well together and are dynamic speakers and this would be right up his alley.  I pointed them out so he could meet them before the morning.  Benjamin is very outgoing and jumps right in.  He took full advantage of all the goodness TMC has to offer.

Thursday night, TMC and Sam Shah arranged a 1st timers dinner at Maggianos.  I am guessing there may have been about 80 people there!  We have a Maggianos in Boston, so I knew we were in for a great dinner.  I always get the seafood fra diavolo and was going to get that, but Benjamin wanted to do the secret pull out family style meal.  It was $32 per person so I balked at first.  He needed to get at least 4 people to do it.  He had Eric and Ben across from us.  He went to the other end of the table to try to sell it, but nope.  Then, Christie, next to me jumped in.  They started building this amazing menu.  I had no chance but to join because I was going to be surrounded by all the different food, so I joined.  Then, the waitress told us it had to be half of our party.  Benjamin worked his magic and she bent the rules for us.  Pictures of all food to follow, and it was fabulous but it was more the journey than the inn in this situation.  There was Tara, seated at our end of the table, listening and watching in awe.  Benjamin orchestrated a feast for us.  We got to know each other - talked about favorite movies, learned about Chef's Table on Netflix from Eric who ate at a 3 Michelin restaurant in Chicago a few weekends ago.  (Benjamin is from Chicago and loves Chef's Table, too!)  There were laughs like we were all old time high school friends, except when I realized Benjamin and Christie didn't know who Ron Howard was and I said, "You must have been born in the 80??"  Yep.

And, our 10 course meal, see link to Dinners


Thank you Benjamin.  I hope I helped you!  It was such a pleasure getting to hang out with you and show you the ropes but I really just handed the rope to you and you were ready to jump.  Good luck with your school year and continue spreading your amazingness!
Posted by JFairbanks at 2:37 PM

Email ThisBlogThis!Share to TwitterShare to FacebookShare to Pinterest
Labels: tmc17