Yes, I am playing PokemonGo.  My oldest two, ages 24 and 21, were super into it when they were little, so I know a lot of the names.  Plus, I love a good scavenger hunt and I love being competitive.  I also love learning something totally new.  Whenever I had a question about how something work, including how do you catch these things, I read about it online.  Three of my four boys are playing Pokemon so we can talk about it.  My 17 year old even said, "I never thought my mom would be teaching me about Pokemon."

When we were in the airport on the way to TMC16, Kathy told Tracy Zager I was playing and Tracy said I was the first in-person person she knew playing it, so we started discussing all the stupid things associated with it, like 2 boys playing it falling off a cliff.  In line at Starbucks, a grown woman had it on her phone, so I said, "See, she is playing it."  So, we discussed it.  Her kids were playing it too and she wanted to get some different ones while away.  The young girl in front of her chimed in as well.  I love that it is an easy conversation starter.

On Friday night, Kathy and I went to Desmos' Happy Hour with Allison (who we met on our plane ride, from the Boston area).  A young woman named Marissa joined our group for dinner.  As we were getting to know each other, I asked if they played Pokemon.  Marissa did and voila we had a connection to discuss for the rest of the weekend.  She was a higher level than me, but it kept me going.  We compared who had which Pokemon.  We would tell each other when there were Pokestops or Pokemon around.  As we rode the Light Rail to the Twins game on Friday night, it was going slow enough for us to get some Pokestops and we learned some history along the way as a lot of the Pokestops are cool statues in the area.  One was right on campus, outside our dorm, the French Fry statue, so we could always go out and stock up.

Kathy and I went to dinner on Monday night at the Acadia and met up with Brian Miller, Jim Dardy, and Alex Wilson.  We had some great teaching conversations but then I asked if anyone played Pokemon.  It was a nice opener into Alex's world.  He was a level 15 at that point. I was a level 10.  He taught me that you can change the name of each Pokemon, so I named a Ratatat a Kathy :) and a Psyduck a Marissa.  Which Pokemon would you name as yourself?  I am still thinking - maybe Jigglypuff?  By the way, to change the name, you just click on the name and start typing. 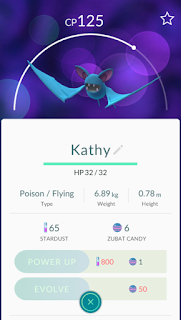 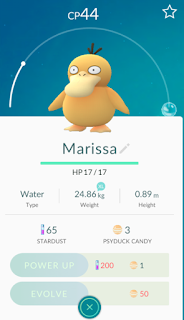 We would see our Twitter feed with people strolling looking for Pokemon. 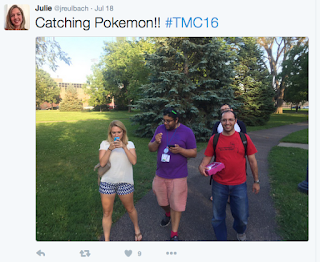 I would like to figure out a way to bring it into the classroom.
Posted by JFairbanks at 5:11 AM