Have you ever played the game Dots?  My colleague, Kathy, @kd5campbell has not.  We were on our late flight home from TMC16.  It was leaving at 8 pm.  We were to arrive home at about midnight.  We were assigned the stupid last row.  We were exhausted but knew we couldn't fall asleep because we were so wonderfully uncomfortable.  On our Delta flight there, we were pleasantly surprised to have TVs at each of the seats and able to listen to music or watch a movie (I wanted Whiskey Tango Foxtrot, but fell asleep).  However, we were disappointed to see this plane did not have the TVs.  Big bummer.  But, thanks to Kathy having a PEN, it saved the day.  We played Dots.

You draw a grid of dots.  I chose to draw 10x10 because we had time.  I also saw the math in it, so came up with some questions and took pictures along the way.  The object is you take turns drawing a line segment that connects one dot to another dot only vertically or horizontally but not diagonally and you cannot go through other dots.  Each segment can only be 1 unit long.  If you end up drawing the fourth side to complete the box, you win that box and get to write your initial in it.  The one who owns the most boxes at that end of the game wins.  I have to say it was the longest I went without someone closing a box.  Here is what we had: 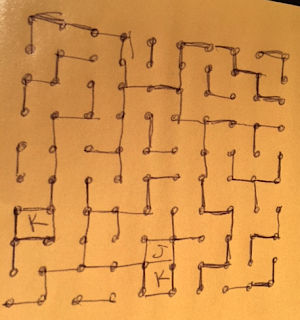 Question 1: What is the next best move? and why? Is there still a possible place to go that won't close a box?  Is there a place to go that will close a box?  Which would you prefer and why?
Question 2: From the 3 boxes that are closed and the maze of a pattern, who do you predict will win?
Question 3: How many dots were involved in the making of this picture?
Question 4: When completed, how many 1 unit in length segments will have been drawn?
Question 5:  When completed, how many 1x1 squares will have been drawn?
Question 6:  What will the final score total?

Picture 2:  The finished game board: 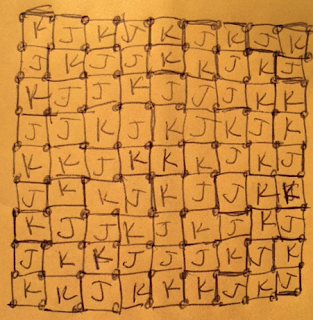 Question 7: In a quick glance, no counting, who do you predict wins?
Question 8: How would you tally this?

Final Picture 3:  The finished game board with scores: 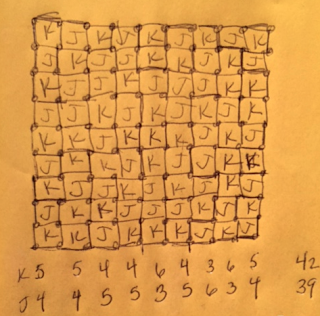 Final note:  I am the J and very competitive and this doesn't make me happy.  However, I did predict from the first 3 winning boxes that she was going to win.

Thanks for playing.  Give it a try.  Grab a pen!