In my Algebra 1 class, we just play with Quizlet Live.  We played 6 different games twice.

I rearranged my desks into lines of 4 desks because the students use their computers all lined up so they can see everyone's possible answers because different answers are on different computers. 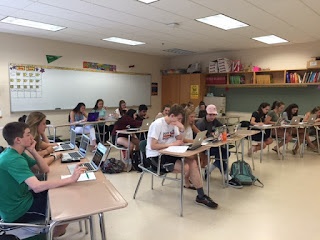 The program makes up its own teams, so we did a lot of moving around today.  It was like musical chairs.  The kids were excited to get new groups, new team names, and entering their own names differently each time.

We played each game twice so they can learn from their mistakes.  It was definitely beneficial to do it twice.

The Data Display one was super quick.  It was like watching a horse race as the teams were neck and neck.  If a team gets it wrong, they drop back to zero though. 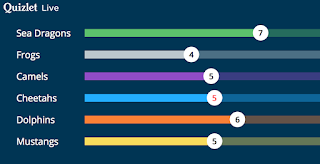 There were many "hoorays" for getting one question right or for winning the whole game. There were some groans on the rational expressions one.  I chose a good mix of vocab mix and solving.

All together, they were very engaged on this second to last day of class.  And, they got a lot of practice questions done in one period.

Yeah for Quizlet Live!
Posted by JFairbanks at 7:38 AM