Last night our community had our 10th Relay for Life of Hopkinton!  I have been a member since its inception.  Our Relay is different from most in that it is almost completely run by high schoolers.  I have traveled to other Relays and see there are a lot of adult teams and family teams, but ours is mostly run by the high schoolers with high school and middle school teams.  They are amazing!  In the ten years, our town has raised over $1.45 million dollars for Relay! That is huge.

Last night, we had about 50 teams.  When we started ten years ago, we were closer to 100 teams, but these 50 teams still did some great work.  Going into Relay last night, they raised about $103,000 already.  I don't have the final numbers yet.

Teams come around 4 pm.  I am usually in charge of the campsite map.  Prior to Relay the teams come to a Bank Night to turn in their monies, get their t-shirts, and pick their campsite.  Then, we have the art department print us up a big map.  I get to greet the people as they come all fresh and excited to Relay and I direct them to their sites.  The teams are so creative with their names and team t-shirts. 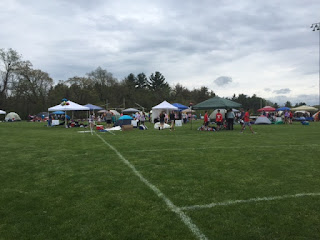 We were led by three amazing young ladies.  Olivia is a junior who has been relaying since she was 5. She is a driven, young woman who is so creative with her ideas and a great fundraiser.  An American Cancer representative surprised us by showing up at the Opening Ceremonies to present Olivia with a volunteer award for working so hard.  There were a handful of winners chosen from the New England states and Olivia was one of them!  Kate is a senior at a private school she attended during junior and senior year but she relayed with us and kicked butt organizing so much for this town.  Cam is a junior whose two older sisters were also co-chairs in their time at our school.  The three of them assembled a huge committee of dedicated high schoolers who worked tirelessly since September to pull this off.

Here are the girls speaking at our Opening Ceremony just as the rain was starting for the night. 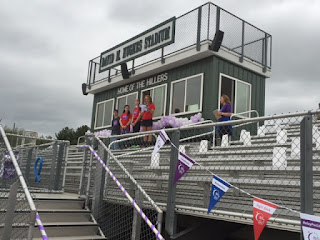 We have a Survivor Dinner at 5 pm in the middle school cafeteria and then the survivors and their caregivers walk down to the track to sounds of a live bagpiper to arrive at the track for the 6 pm Opening Ceremony.  My friend, Dana, is the only other current adult on the committee besides me.  He is a survivor himself and is part of the survivor dinner, also organized by our co-chair, Cam.  I used to attend the survivor dinner with my mom who had thyroid cancer.  (She is still alive, just moved to Florida three years ago. ) We listened to a mother speak who has had a team before because she is an ovarian cancer survivor.  Her son is currently an 8th grader and unfortunately, the team has a lot of cancer connections.  She did a great job telling her story of hope and success.

Here is the Survivor Lap that kicks off our lap walking. 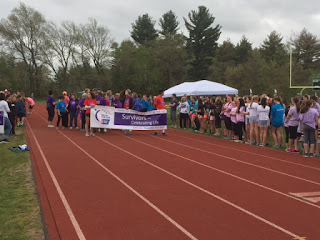 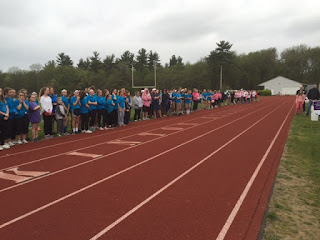 (I didn't plan the pictures that way, just happened, cool!)

One new thing we did this year was Pantene's hair cutting for cancer patients.  Our current senior class has I think 3 or 4 kids who have recently lost parents to cancer.  One of the families arranged to bring hairdressers and Pantene's program to our school.  It was a great turnout for the first time and girls and women all sat in a horseshoe to hear about the program and get ready to cut it off! 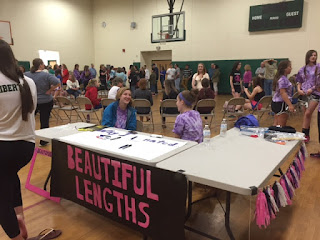 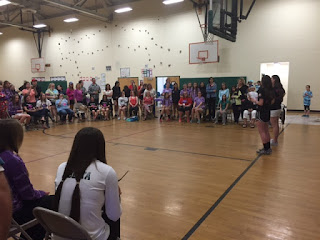 I Relay because 30 years ago my husband lost his brother, Michael, to complications from cancer.  30 years ago, yikes!  My husband was 15 and Michael was 21.  So not fair.  He has also lost his grandmother, grandfather, and 2 aunts to cancer.  We lost a Relay committee member to cancer.  My best friend lost her mom to cancer.  My mom had cancer. I played on a women's softball team, we lost two women to cancer, one fought and is cancer free, and one is currently fighting.  I lost the colleague I shared my classroom with to cancer.  As I said above, the current senior class has lost 4 parents to cancer.  My son, who graduated in 2010, lost a classmate, Tommy, to cancer.  He left behind a legacy of B+ (Be Positive).  He was diagnosed with brain cancer during his junior year in high school.  He went to prom.  He played football in the fall of senior year.  He had such a positive outlook towards his cancer it kept him going.  He wrote his college essay starting with something similar to "B Positive, it is not only my blood type, it is my outlook on life."  He did not make it to college as he passed away in March of his senior year.  At school, we have B+ days and wear B+ tshirts and the money goes towards a scholarship in his name.

Just too much cancer.

However, we did hear a good stat last night though - since 1991, 25% less people have died from cancer!  That is a lot of lives saved!  But, cancer is still killing, so we are still fighting!
Posted by JFairbanks at 4:52 AM