With the new Common Core Algebra I, we teach polynomials first then go into quadratics.  The idea is good - it gets them to factor first and hopefully make the Quadratic chapter easier.  We shall see.  They weren't so strong with factoring.
Anyways, we had an Early Release day due to prom and had wrapped up the Polynomial lesson the day before, so I figured it was a great time to use their laptops and dive into Quadratics.  I uploaded four different short videos to www.edmodo.com for the students to watch and answer questions about.  They could pause or rewind as needed.  The first one was about Nintendo's Mario.  After the polynomial test, I had them plot points that connected into a parabola, so that would get them thinking.  I asked how Mario might be connected to this shape.  "His jump!"  Ahhh, they were on the right path.  I told them the second video was about Angry Birds - why?  Oh, they fire the birds in this shape as well.  And, the last two were about swings - a swing through the forest and a swing on a swingset.  They could see it.  They were interested...and they were off.
Well, after they found or borrowed earbuds.  They are supposed to bring them every day.  They are supposed to bring a pencil every day too and that often doesn't happen.  It is May, we are still working on the small things.
Mario is on youtube and its description says it is a "good culminating assignment".  I liked the idea of starting with it because it might grab the students and I think it did.  It had them looking at the shape of the graph, if it opened up or down, how it gets compressed or stretched, and the vertex.  So, they should be ready to go with some important vocabulary for tomorrow's class.
The Angry Birds video talks about the zeros of the graph.  I am hoping the students might see the connection between the factoring we have been doing for weeks and the zeros of the graph.  It is a big "jump" for them but I will cross my fingers.
And, the last two, have the students watch and graph the swinging process.  It will be interesting to see what their graphs will look like.
When I first handed out the graphing homework after the Polynomial test, they said "Oh, graphing, we haven't done this in a long time.  This looks easy."  Okay, so if I can bring all this together - factoring and graphing, maybe it will be a good way to wrap up our Algebra I year.

My worksheet for the 4 graphs:  4 videos for intro to Quadratics
Posted by JFairbanks at 5:13 PM 1 comment:

Stations - Up and Moving around the room

I love having the kids do stations.  It is a lot of work up front for me to create, organize, and plan, but it really seems to pay off.  The kids like to get up and move around and work together with friends.  I like to listen to their math conversations.  And, it gives me time one-on-one with a student if they are really stuck.

I combined a few ideas for stations for our review of polynomials.  I will include it here:  Station Review for Polynomials

I read on someone's blog about letting the kids write on the windows.  Well, I have three big windows in my room and it really worked.  The kids thought it was pretty cool.  And, they got to write the problems twice.  I had them work it out on the window, then record the work on their papers as well.  Here are some pictures: 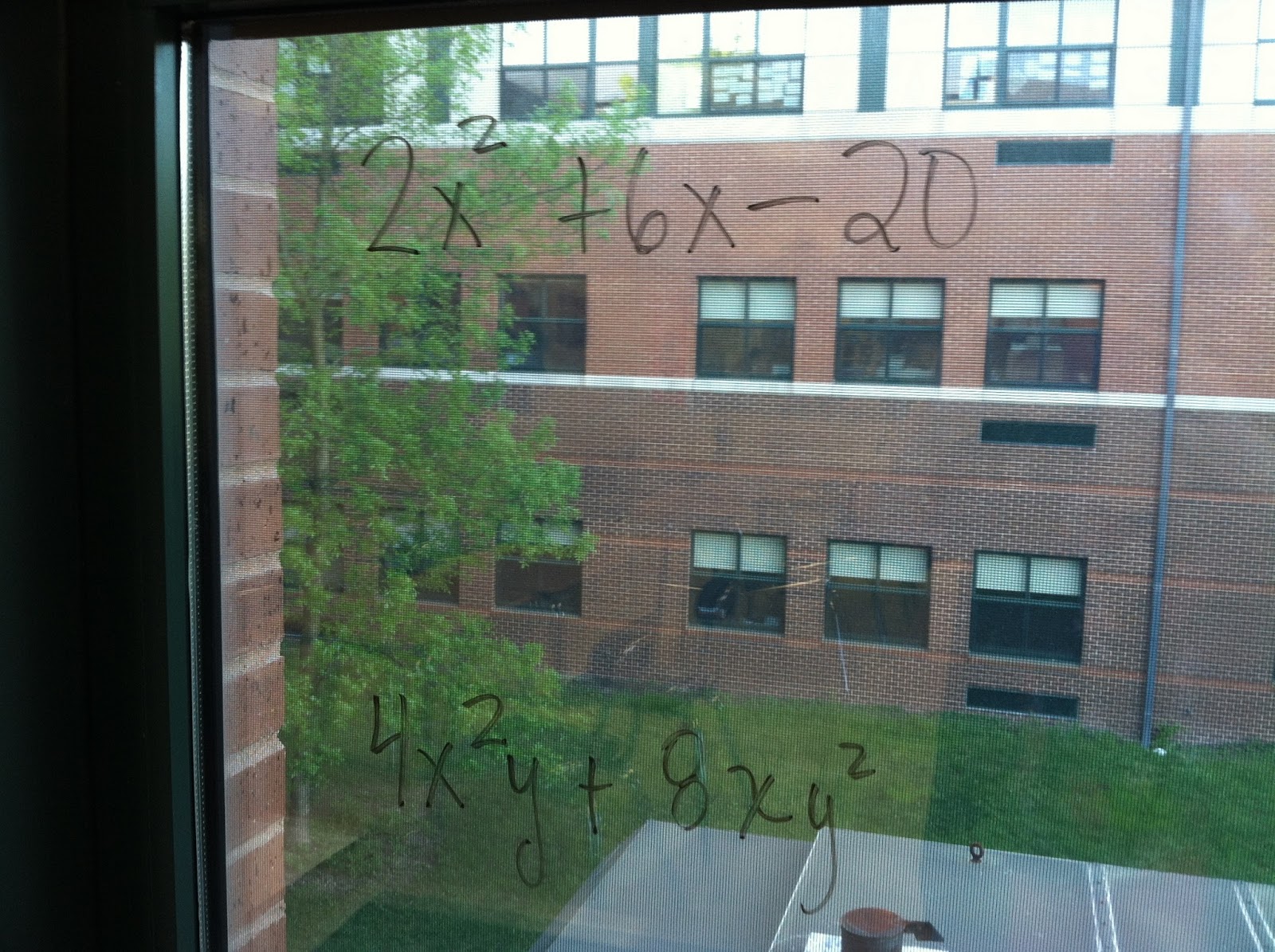 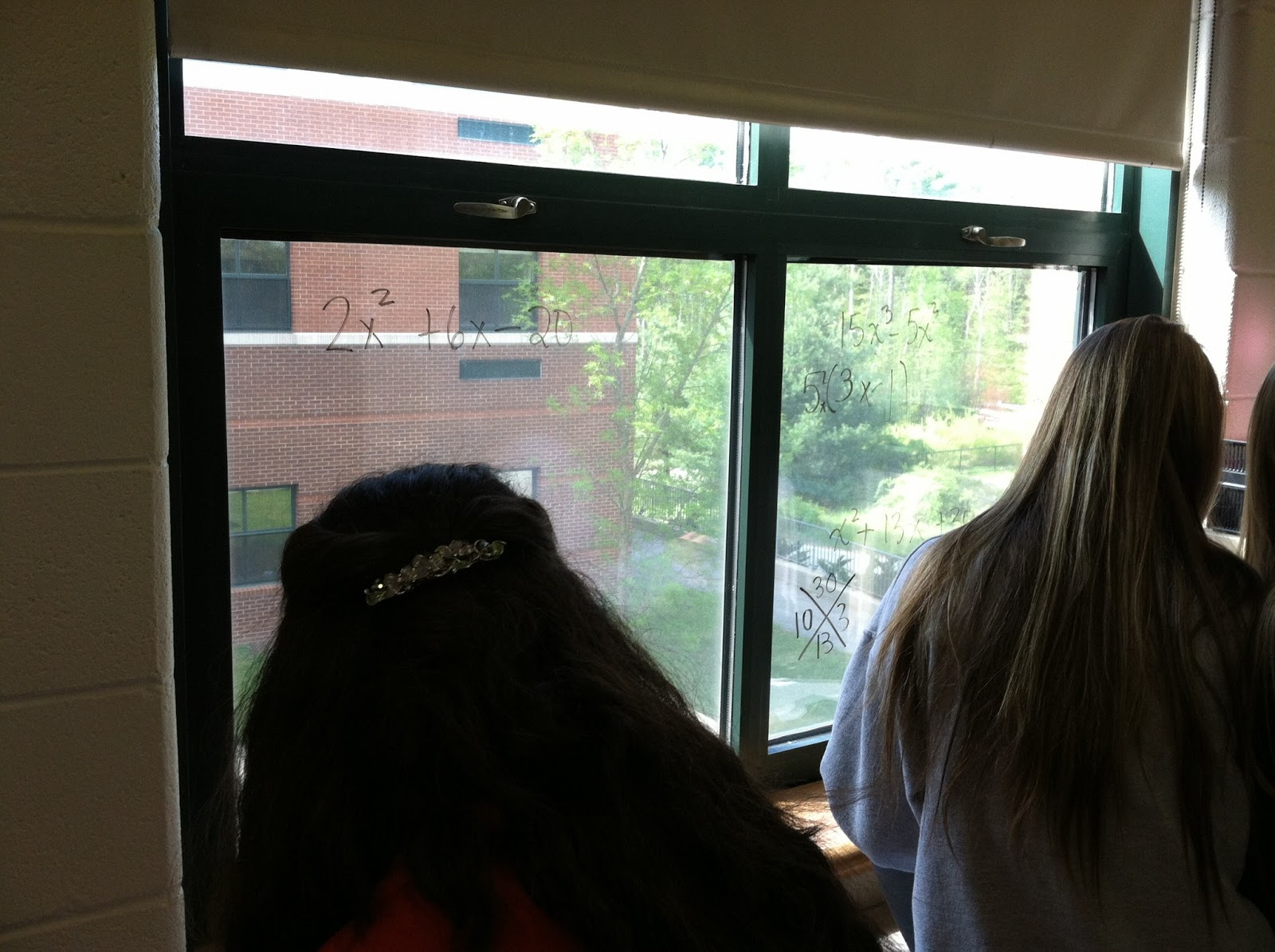 I had them working on the back white board: 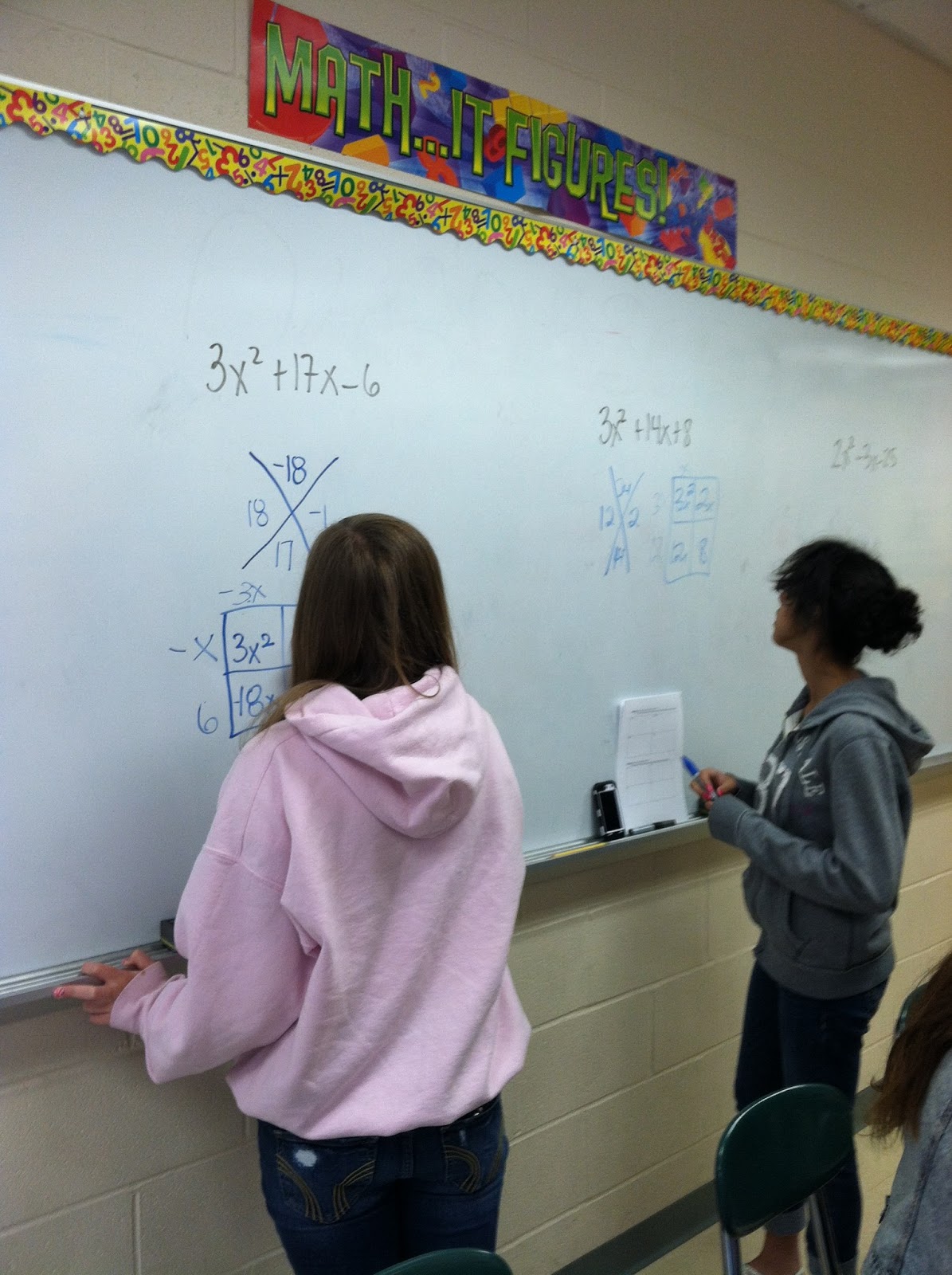 They did some multiplying with colored polynomials and made up their own problems given the classification.  For example, multiply a quadratic binomial by a linear binomial. 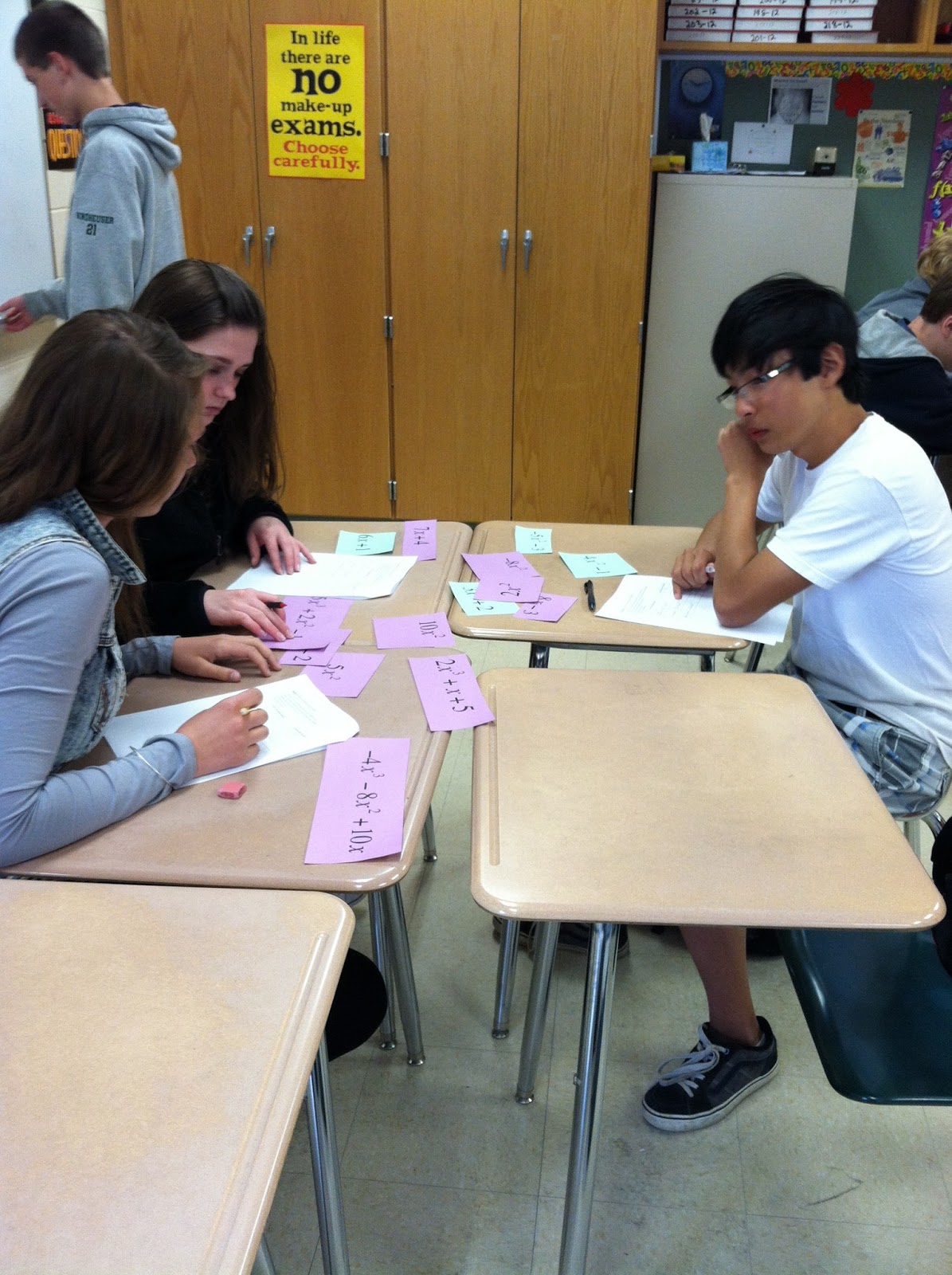 These boys are working on adding and subtracting polynomials.  I have small white boards (from Target) on which I wrote different polynomials.  The kids each picked two and then flipped a coin with a plus or minus to create their own addition or subtraction problem: 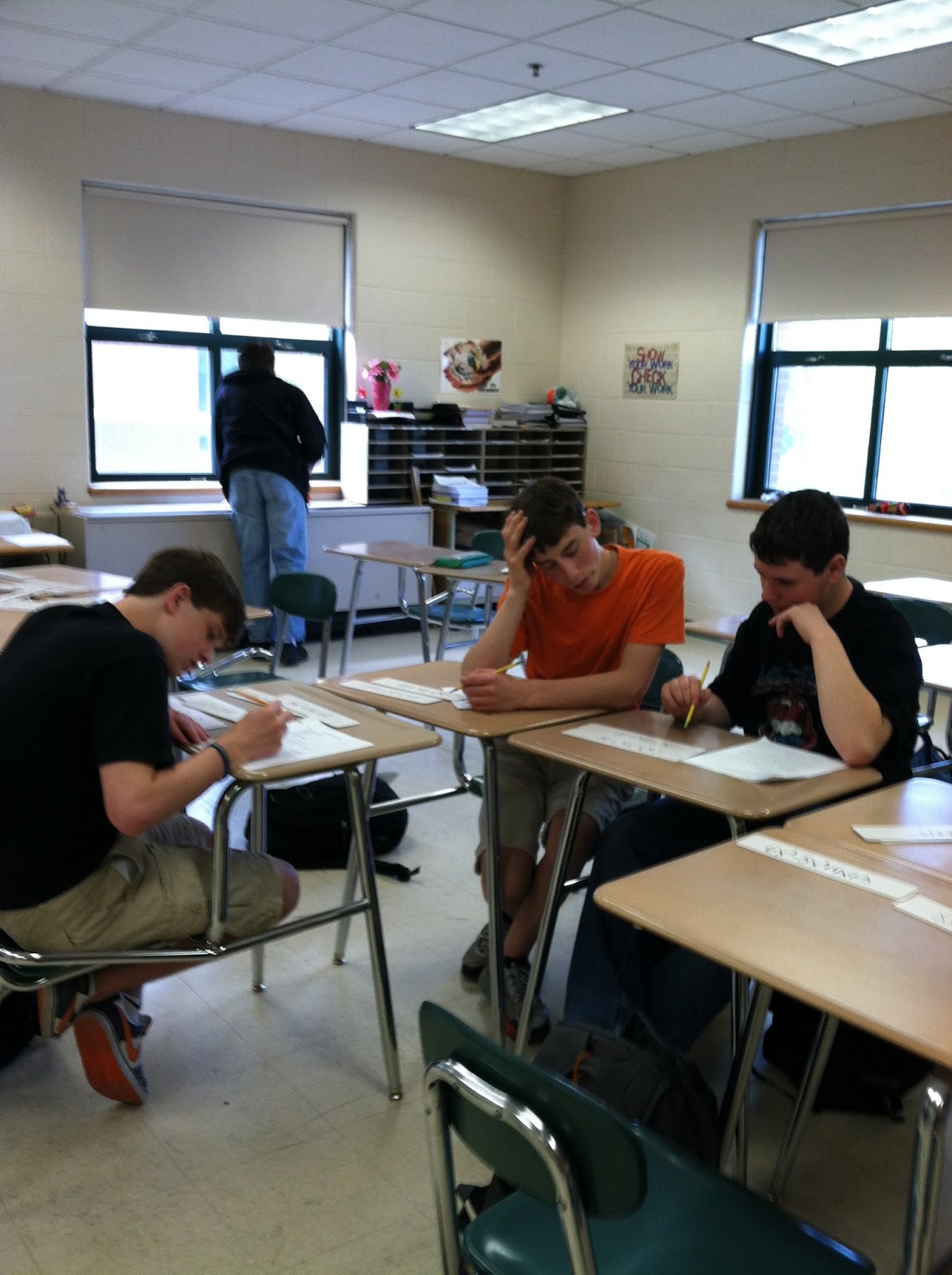 And, here are the girls: 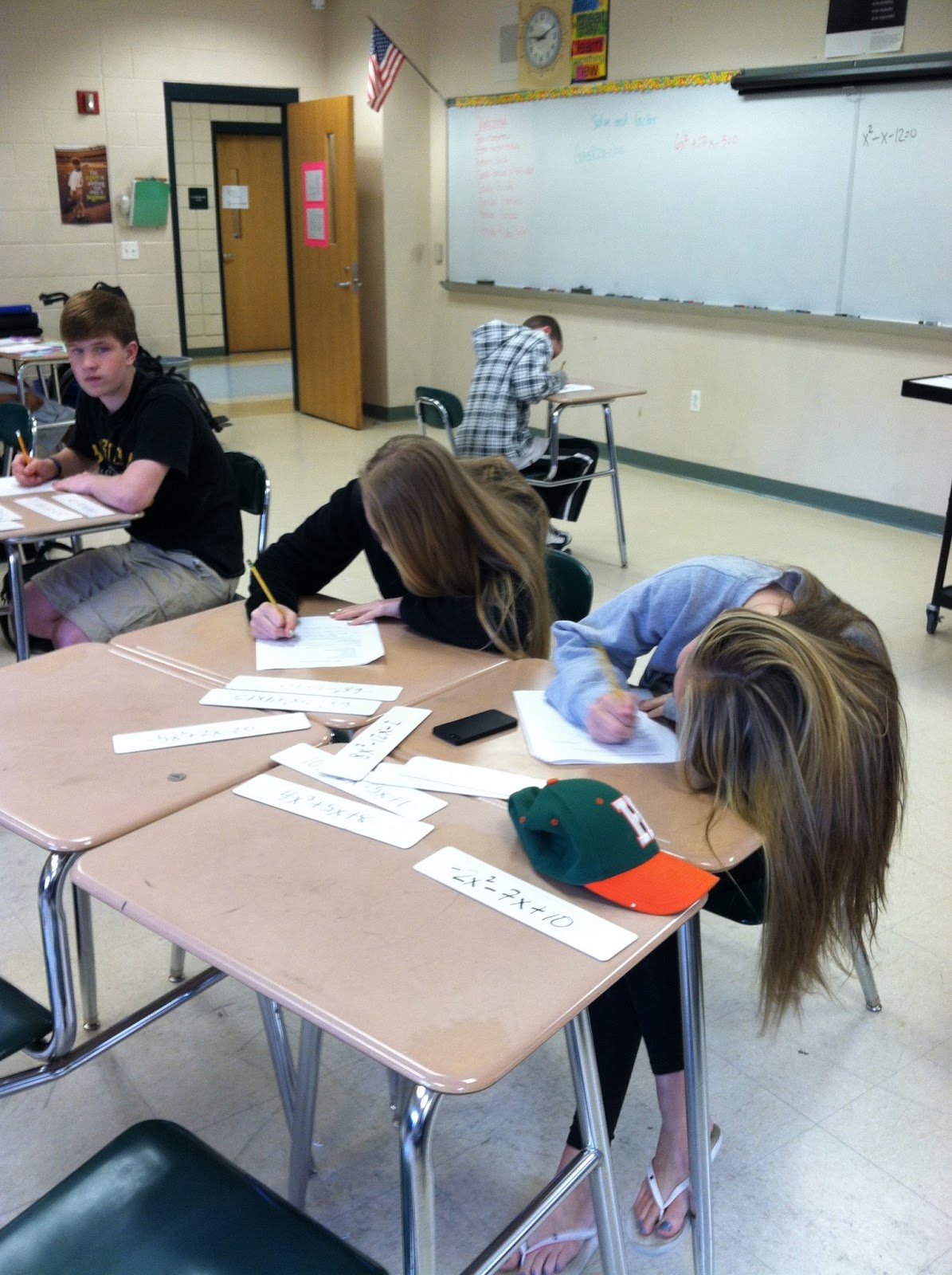 These are what the small white boards look like: 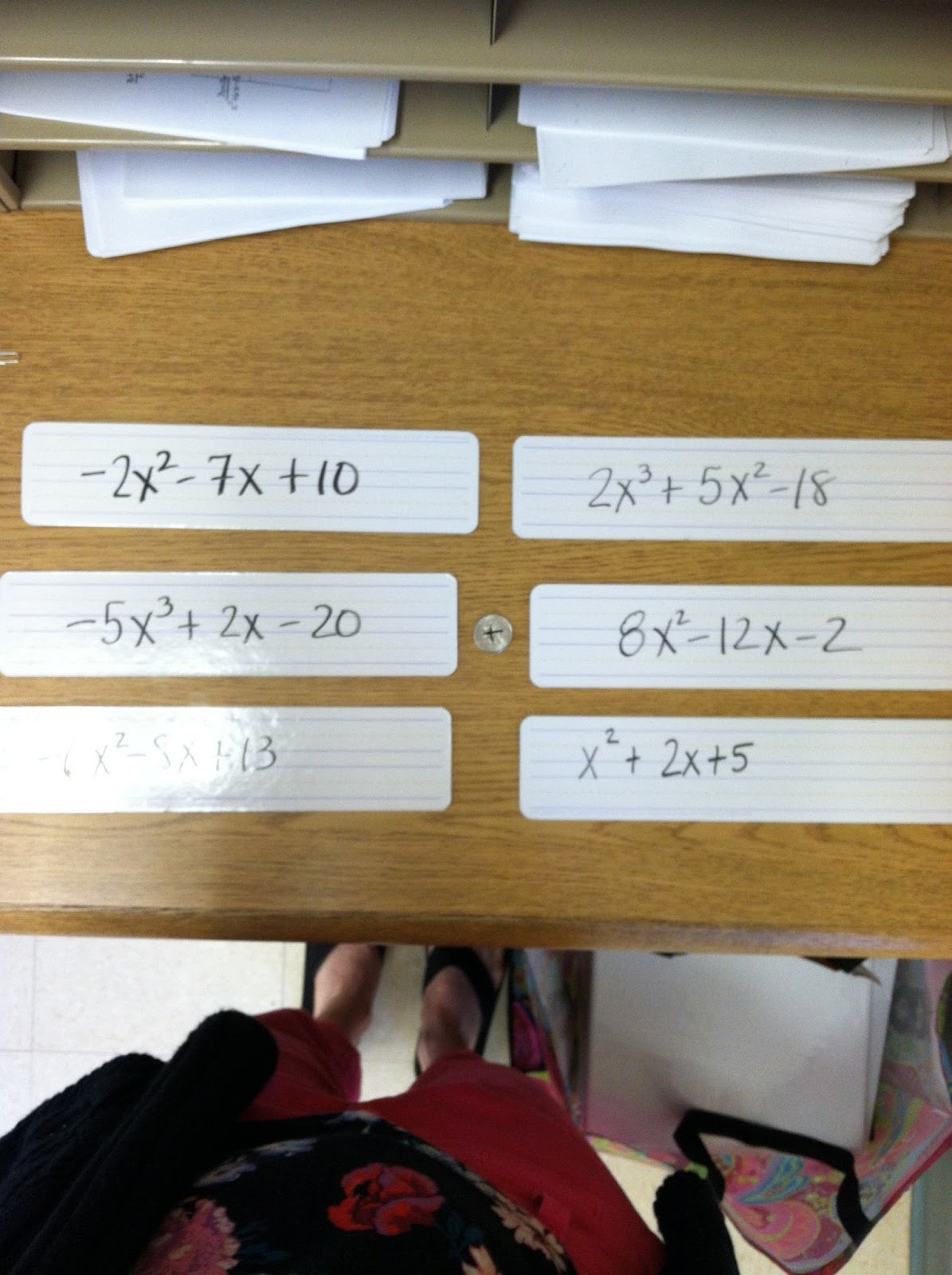 And, finally, a full class view of everyone engaged and learning.  The test was today and I still need to correct them.  They finished rather quickly which always makes me nervous.  They either knew it all or didn't know anything.  Hmm.....

On Friday, we will start our unit on Quadratics and again, I have mashed together different ideas from blogs I read to have the kids watch short videos before I even teach it.  I will share that in a blog over the weekend.  I think it will be a hit! 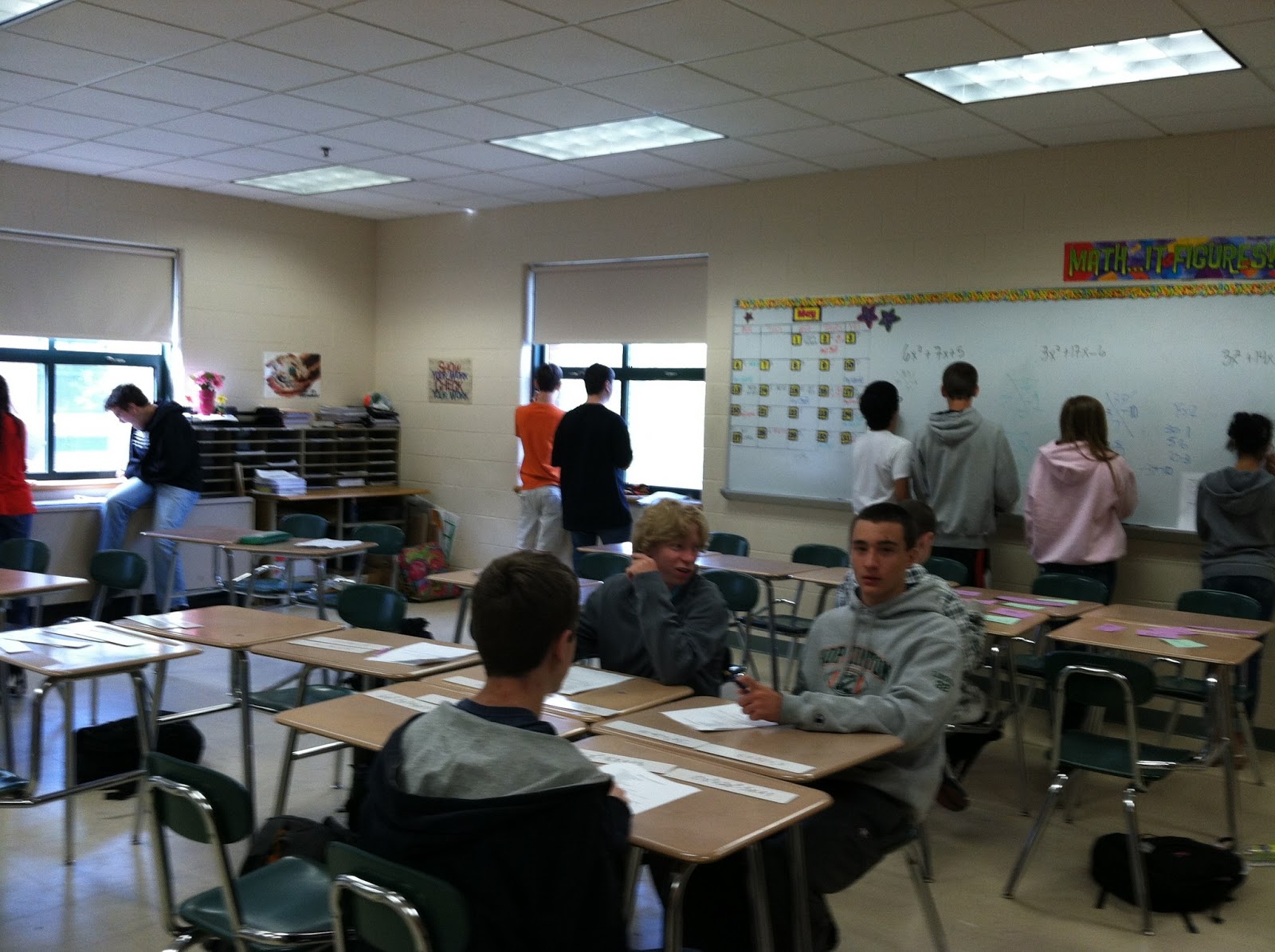 Good job!  Off to correct those tests!

Posted by JFairbanks at 2:16 PM No comments: