I have a small class on mixed grades.  I never know how many kids out of 8 I will have.  Today was a good day, I had 6 students.  I was planning on heading outside to throw paper airplanes and collect data to analyze from Julie's blog post.

We planned in the classroom first.  What did we need to know to throw these paper airplanes:
*how to throw a plane
*how to fold a plane
*what to measure in - this lead to a lesson in the difference between a yard stick and a meter stick as I held a meter stick up in front of them.  We thought about measuring in inches but they thought that would be too hard, so we settled on meters.  I had 6 meter sticks, so 2 per group would work out nicely to lay and measure each of them.
*how to shoot and measure - we paired up.  Each person drew their starting line with chalk.  The other person had chalk to mark where that person landed.  Originally I thought we would have each student throw 10 times but quickly changed that to 5 throws once I saw how long it took to throw, mark, and measure.  We did have one person throw their 5 throws and then measure.  That worked out well.

It took us an entire hour to plan and execute this.  I collected the 30 data points.  Next class we will analyze it.  Phew! 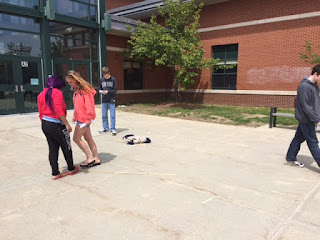 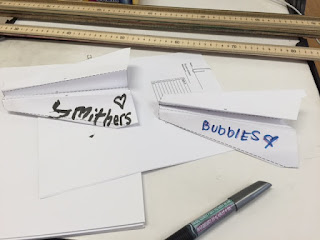