A Paper Crane Made My Day #mtbos30 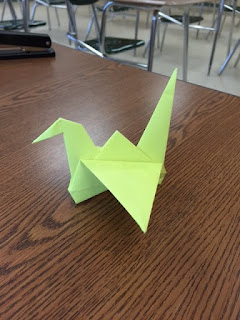 I came into school on another rainy, dreary day to find this little yellow guy waiting for me on my desk:

I don't know who he is from but it brought a smile to my face because paper cranes remind me of my cousin Joe.  He was born in 1991 as a twin to his brother, Sam.  But, Joey was born with half a heart.  Oh, he was a fighter.  He learned to do everything Sam did, but when he was almost 2, he had to have a surgery that was followed by a stroke, leaving him with difficulty on one side of his body.  He lived in VT but was treated at Boston Children's Hospital.  I was his only family around so I visited him a lot and donated a lot of blood over the course of his visit.  He wasn't able to walk right after and talking was slurred.  But, he had a lot of therapy and walked with assistance.  Joey was such a joker kind of guy.  He also loved movies.  He got a job in a movie store.  He loved Disney too.  And, he loved paper cranes.

Joey passed away in June of 2011, write before his favorite holiday, the 4th of July.  He was just shy of 20 years old.

His mom has since made a lot of paper cranes and on the one year anniversary of his passing, they released them in a stream.  People from all over send her paper cranes.

So, on this rainy week, a yellow paper crane was just what I needed.
Posted by JFairbanks at 7:50 AM