First Day of School and Bucky the Badger Explains it all

I had my first day of school yesterday after a busy month of August preparing for it.  It went very well.  I had a packed agenda and didn't get to 31-derful in my Accelerated Algebra 1 classes but I did in my Accelerated Algebra 2 class with just 10 minutes left in the class.  They worked in pairs and I had three pairs succeed!
But, more importantly, I opened with the Bucky the Badger 3 Act by Dan Meyer.  I did it in both levels of Algebra 1 and 2.  I prefaced by explaining what a three act was and that I got to meet Dan Meyer in person and how I hope to use more of them in my classroom.  We listened to the first act about this football mascot having to do pushups for each football score.  One game, the team scored 83 points, and the question becomes, how many push ups did Bucky have to do?  They listened, they were interested.
Now, I asked them to guess.  Just quickly guess.  Don't do any math, don't write anything down, just guess.  They were uncomfortable.  Was I for real?  They shifted in their seats.  They looked up in the air.  They looked to see if anyone else was writing anything.  It was hard for them to take a chance and maybe be "wrong".  I moved them along quickly to - pick a number you know is too high and a number you know is too low.  They wrote all of these in their notebooks.  I asked for some of their predictions and wrote them on the board.

We moved on to Act 2.  What information do they need to know?  They answered - how many points for a touchdown, how many for a field goal, do they always make the extra point, how many touchdowns and field goals were scored, were there any safetys scored, and finally, what was the order that it all happened in.  Act 2 shows the answers and they were off to work.  I encouraged them to work with their neighbor and to have some discussion.  It was fun to watch them work and listen to their thought processes.  Some worked by adding horizontally, some did a 2 column table, some a 3 column table, some were totally clueless, but slowly worked through each score.  Some lumped the 7 touchdowns together and figured out that that wouldn't work.  There was a group of 2 boys where one came out to 1 number too high and the other boy was 1 number too low.  Interesting. They were persevering (a good math practice).  They didn't want to give up.  They wanted to figure it out.  I gave enough time for most of them to do it.  Some of them found their small calculation mistake or they found out the mistake to what they were doing.  A bunch of them figured out a pattern - imagine that!  I shared the different ways I saw students working.  In the future, I will let them share, but I was quickly running out of time.

In Act 3, I shared the answer.  I didn't get into the bit about the "was it really the same badger", but I did ask them about their guesses on the board and a little intro to "what do you notice?"  They were all too low and all around each other.  I asked them if they were indeed uncomfortable making the guesses in the first time and they quickly answered yes.  They don't want to guess.  They want to do the calculation and get it right.  I am going to show them it isn't just about getting the right answer but all the different ways the problem can be solved.  I extended the problem by having them think about if order mattered.  Would it have been a different number of pushups if they 2 field goals were scored first in the game?  I got a mixed batch of answers and asked them to think about that later that night.

They were persevering, finding patterns, having a math discussion, finding and fixing mistakes, estimating, and problem solving.  I loved it and I think they did too.

Now to get ready for day 2.  Thank goodness I had today off.  I went math supply shopping on my day off and practice playing with Barbie bungee. 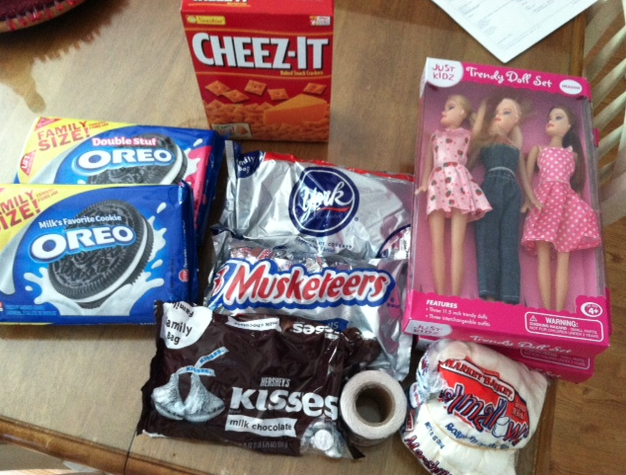 Posted by JFairbanks at 1:17 PM