Barbie Bungee - Why did I wait so long?

I think I have been reading about the famous Barbie Bungee for about 2 years now.  I don't know what I was afraid of - lack of time, mostly.  But, you know, just make time.

I did Barbie Bungee today in two Accelerated Algebra 2 classes.  It was a hit.  They had already learned how to make scatterplots and determine lines of best fit.  Then they made their predictions.  After the activity, I used the Barbie data to introduce the correlation coefficient and how to do linear regression on the calculator.

Here is all my stuff set up for Barbie: 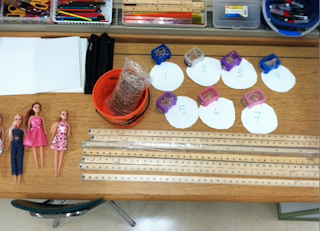 If you notice the white circles with numbers, those are paper plates that I cut the middle out of.  When my husband and I were practicing Barbie Bungee, he was having a hard time seeing where her head actually went, so he wanted something flat so he could "hear" her head hit...voila the paper plates.  I bought my little boxes from Staples this summer and they were perfect for little boxes of rubber bands.

Another note, I had a skirt on today to wear, but realized I would be standing up on a table - so don't wear a skirt.  I realized this in time at home to change.

Here are some kids doing it: 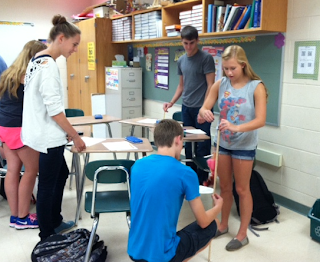 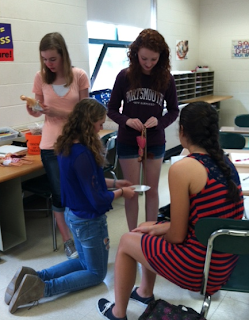 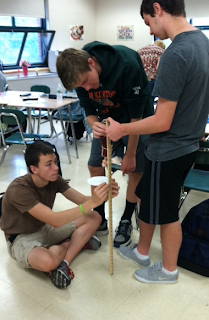 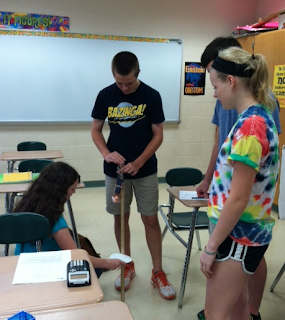 I did take a video but can't figure that out yet.  We did have one group who named their Barbie Simone.  Poor Simone lost her head (literally).  I bought really cheap Barbies.  Another one lost her leg.

It was awesome!  I got to finally have fun with my students in a way I got to know them.

I highly recommend you try it.