Barbie Bungee is done for the year

I was able to do Barbie Bungee in my Accelerated Algebra 1 and 2 classes plus my class of seniors in Futures basic math.  I wrote about Barbie Bungee with Algebra 2 earlier.

For my seniors, I wanted to extent it a bit, so we had her jump off our senior balcony.  First we had to figure out how to measure it.  Our only tools were 3 meter sticks and 5 rulers.  Off to work they got.  One went up and hung a meter stick up.  One stood below and reached the meter stick up.  Then another student added a meter stick below this one and then turned it for another, and they filled in with rulers.

They went to work in two groups.  Barbie ended up getting tattooed in one group: 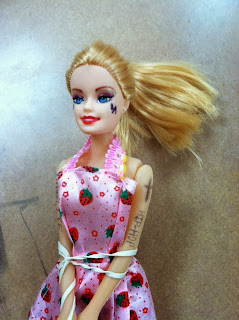 They predicted 48 and 51 rubber bands, pretty close.  Off to the balcony to drop them.  Of course, it coincided with lunch getting out, so we happened to have a big audience.  She jumped and was quite a ways away from the ground.  We went back and one group added 6 more and one group 10 more.  These were just guesses.  The 10 was too much.  55 bands was just barely too much, one less was perfect - 54.  And, the kids wanted to know why the math didn't work the first time.  We brainstormed and they figured out they may have made some tiny errors in actually measuring.

One students asked where I came up with these projects.  Blogs and twitter :) 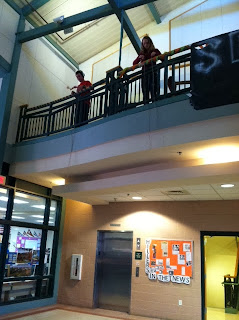 Posted by JFairbanks at 2:05 PM