It is about balancing mobiles and look something like this: 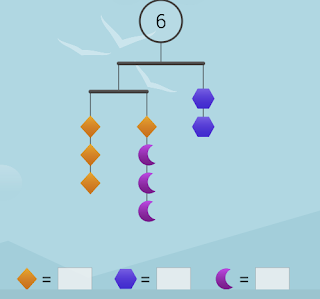 They are great!  I heard about them at NCTM in April and we have been doing them in my small math class since then.  We do three a day.  You can have the students do them on the computer, but I take a screen shot and add it to my powerpoint.  Then, the kids work on individual whiteboards to answer them.  I love the natural progression of difficulty.

And, surprise, after a while, gasp, fractions might be needed.  In the example above, the kids would cut 6 in half and see that each branch will equal 3, but then, you have to divide 3 in half, so they discover they will need fractions and not just 1/2.  It comes naturally to them after doing so many.

We have gotten so good at them, that I thought it was time to make our own.  As we worked on the daily three, I asked a few leading questions - as we think about designing our own, do you think it is easier or harder to have a bigger number at the top?  Some kids said bigger numbers because you have more numbers to work with.  One boy decided his total number was going to be 3.  He likes a challenge.  Sometimes, one of the shape values might be given.  I asked when that might be.  We looked at our daily three and figured that out too.

I gave them some parameters.  They had to be at least 3 branches and use at least three shapes.

As one student was making his own, he declared, "I am going to work backwards.  I am going to make my 4 shapes have numbers and then make the puzzle."

It lead to some good thought process.  After they made them, they had to decide if they needed to give the students any shape values.  Some did and some didn't.

Here are there finished Solve Me Puzzles.  After they finished, we swapped whiteboards and they solved each others. 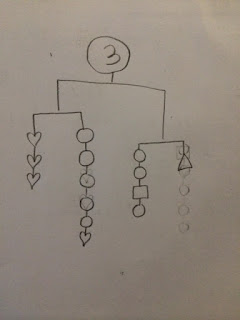 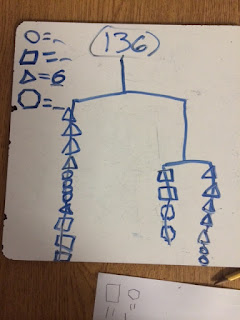 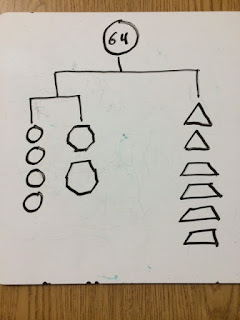 In the above puzzle, you need to be told the triangles are 12, if I recall correctly. 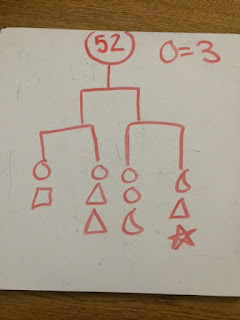 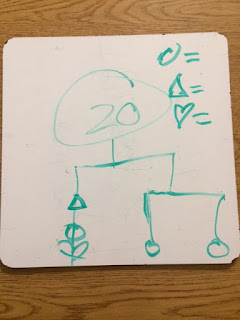 Posted by JFairbanks at 1:18 PM