I just had my kids do this Angry Birds Project.  (I loved that there were 5 editions.  Although one student wrote "2nd addition".)  This teacher did it with her 8th graders and mine are sophomores in Accelerated Algebra 2, so I was a little worried it might be too easy.  We are going so fast through this material with the new common core, I don't feel I have any time for big projects in class, so I assigned it for out of class.  I gave them a month and made it due after we finished quadratics, so they would have everything at their disposal.

I also liked the idea of an "old fashioned" poster.  I had them work in groups of four and each take a bird and do their bird's graph and then put it together on one graph.  The posters were great.  The kids used their calculators to graph and solve.  They used Desmos.  They used calculators and did linear regression.  They used the quadratic formula.  There was all sorts of stuff being done.  Too much for just the front of the posters, lots had to go on the back.  Now I just have to figure out how to get them all up on my walls.

Our grades were due on this past Monday so I did a ton of grading over the weekend.  I felt refreshed being all caught up when I came to school on Monday only to remember I would be collecting these projects.  Yesterday was a professional development day, so I came in an hour early and left an hour late because I was so excited to see how the kids did.  The projects were awesome.  I got the 12 projects graded!  I told the students not to ever expect that again :)

Even though they were old fashioned posters, the kids got in the technology.  One group photoshopped the angry birds and two pigs into www.desmos.com !  Cool! 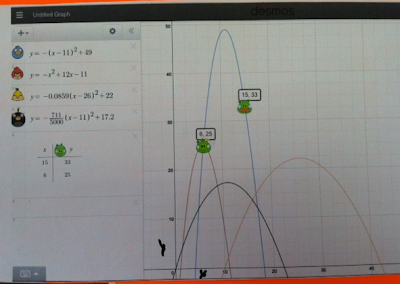 Here is another group.  They even added glitter to their title.  I love glitter :)  The group below cut out their little angry birds and pigs and glued them. 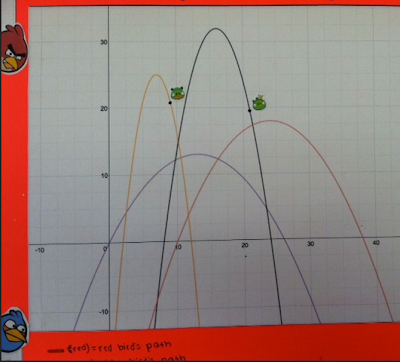 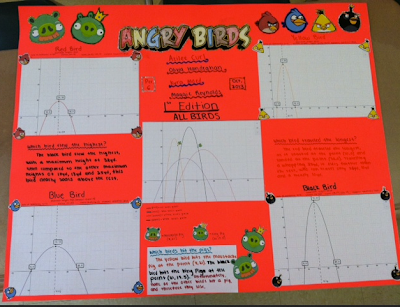 Posted by JFairbanks at 4:36 PM