Last week we learned about the unit circle in Accelerated Algebra 2.  They had it last year in Geometry and we are continuing it this year.  I explained where it came from by drawing out the special right triangle and then we created lovely paper plate unit circles, writing the degrees, radians, and points all around the edge.
When they returned yesterday, I wanted to see if they could create it on their own, so I grouped the kids into threes and had them all up at the whiteboards.  They were instructed to make the unit circle, including degrees, radians, and points and then to write 6 problems and solve them that are 6 trig ratios, a mix of degrees and radians.
It was interested to watch them go through the process.
Did they draw the circle first or the coordinate plane?
How perfect did their circle have to be?
Some started using yard sticks to draw diameters through the circle to represent the different angles like I did in class.  But, some decided they only needed to put the points on the circle.
There were three people in the group. Some groups had one student do all the degrees, another do the radians, and then the points.  Some groups broke it up and each chose to work on a conic.  Some groups had one person write as they figured it out together.
Then, they had to write their 6 trig ratios.  At first some thought I meant 6 trig ratios of 6 points or 6 trig ratios of each point.  Goodness, no, just 6 random trig ratios.

I watched and admired their work and the thought process but I was starting to see some mistakes.  As the groups finished I extended my original idea and asked them to mingle around the room and see if they could find any mistakes.  A few were found.  The groups who drew them wanted to know right away, where is the mistake?  They didn't want to have any.

It was a good 20 minute activity. 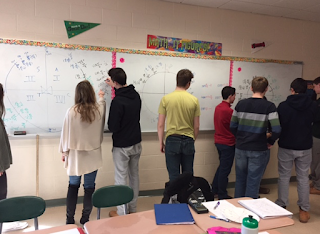 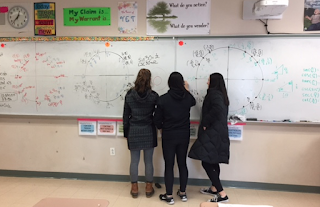 Posted by JFairbanks at 4:31 AM