My Circle Class Thanks Alex O!!!

I have an Accelerated Algebra 1 class that for some reason is obsessed with drawing circles.  All year they have been trying to draw perfect circles all over my boards.  I think it was in October that I told them I know the World's Record Holder for drawing the perfect circle.  They were pretty impressed.

I came up with the idea of doing a Mystery Skype after listening to the #DitchSummit when @mrdearybury1, @mrs_smoke, @gruffcorn13  these people explained the whole Skype world.  There are a lot of teachers and classes willing to mystery skype to try and figure out where in the world they are.  I decided it was time to bring this World Record Holder into our class room.

.....Introducing Alex Overwijk @AlexOverwijk   I met him at NCTM Boston and then we met up again this past summer at Twitter Math Camp.  Great guy, terrific story teller.

I am not that familiar with Skype, so I tried it at home and it worked on my home computer, but not my school computer at home.  I tried it on my school computer at school, still didn't work.  I finally brought it to our IT guy and he told me Skype was blocked, so he unblocked it for me.  I tried Skyping with my sister.  I could see her and she couldn't see me.  I had to call again using the video feed button.  Ahhhh, learning curves.

Alex and I set up a time of 8 am today (Thursday) to practice.  He tried to call me and it failed.  Then, he sent me a message and we were going to try again at 10:08.  We did.  I could see him, but he couldn't see me and now my camera was off.  I never turned it off, but it was off, so back to our IT guy.  He had to shut my computer down, some glitch.  Now, it was working.

All of this effort to putting this together, so I decided to build the anticipation.  Yesterday in class, I added to the agenda "Tomorrow: Mystery Surprise"  They are a very excitable class and they revved it up even more, trying to guess like crazy.  They were convinced it was a mystery reader like they had in elementary school.

Today came, lunch block class came and they came in so excited for it, but we weren't doing the mystery until we had an hour of class and then lunch, then they come back for 20 minutes after lunch.  The anticipation was building.  They were loud!  I told them to hurry back from lunch and crossed my fingers that the technology would work.

They got back before me and Alex called.  My plan was for the kids to ask him 20 questions-style  yes or no questions to figure out who, what, and where.

They got me.  They knew it was the "circle guy" right away!  Someone started googling him, somebody starting drawing circles. 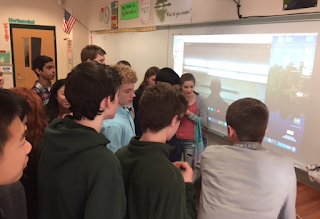 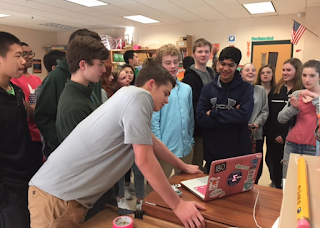 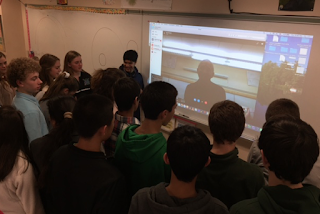 Alex was great.  He was so patient with a bunch of 9th grades huddling all around my computer for a change to see him and talk to him.  He asked them to go to his website Slam Dunk Math and read his blog post today.  It was coincidentally the 10th year anniversary of his success.  We took turns having the kids read his backstory.  Then, they asked some more questions.  He was going to draw one for us on his whiteboard and was all set but then his marker was dead.  He went into the hall and drew a huge one for us.  The kids asked if that was allowed.  It was a little hard to see on Skype so he sent a picture through Twitter. 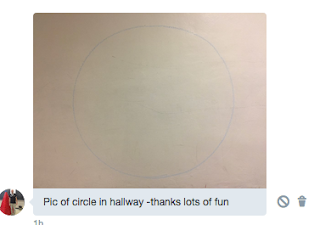 One girl wanted to show her skills, so we turned the computer and showed Alex.  Then, they asked for tips.  Again, he was so patient and the kids were so excited.

It was a lot of effort up front but I think it was worth it.  The kids were going to youtube to look him up.

I did take some video, but I need to look it over.  Stay tuned for updates soon.
Posted by JFairbanks at 11:52 AM