I played a Post-It Relay Review Game in Algebra 2 class today.  I saw it on twitter but I am not sure who it actually came from - so thank you both Jon Orr @MrOrr_geek and Brian @_b_p.  It was so easy to do and a hit!

We had a big unit with logarithms and conics.  I wanted a good review game that would be competition but not necessarily involve speed and time so I could use more in depth problems and not just the top/fastest kids were scoring.

So, I came up with 24 questions, so from logs and some from conics.  I did different levels of difficulty and names them 1, 2, or 3 point questions which will lead to 1, 2, or 3 sticky notes.

The kids worked in groups of four and got a worksheet with four problems.  The first two problems were the same and the last two problems were the same and between them, they were on a similar subject.  The kids cut the problems out and started working.  If they had the same problem, they checked their answer with each other and then with me.  If they got it correct, they got a small sticky note and picked a number 1-100 to stick it to on the 100 board projected on my white board.  I had 7 groups, so they were lettered A-G.  They wrote their team letter and the number on the sticky and put it on the board.  (I did this just in case the projector got bumped.) 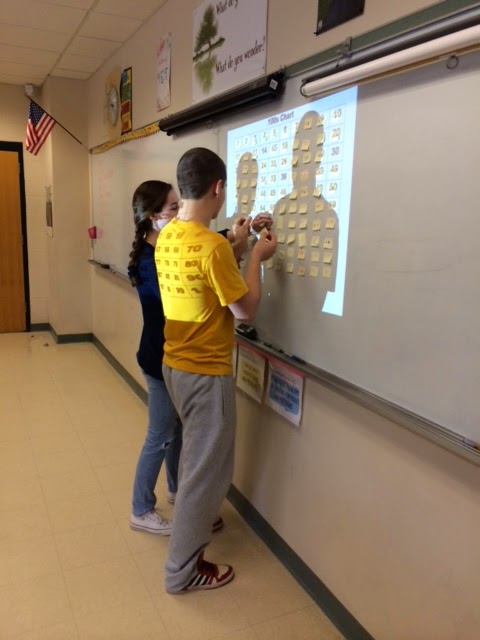 The kids can decide what worksheet to take.  Do they want to stick with the easier 1 pointers or move on to the 2 or 3 pointers.

It was so fun, went so smoothly, and the kids really liked it.  I will definitely do it again.

Right before the bell rang, we had actually filled all 100 spots.  I didn't know it was going to do that but it was cool.  (They worked for about 30 minutes on it).  I used my computer to pick a random number and the lucky number was 36.  They won bragging rights! 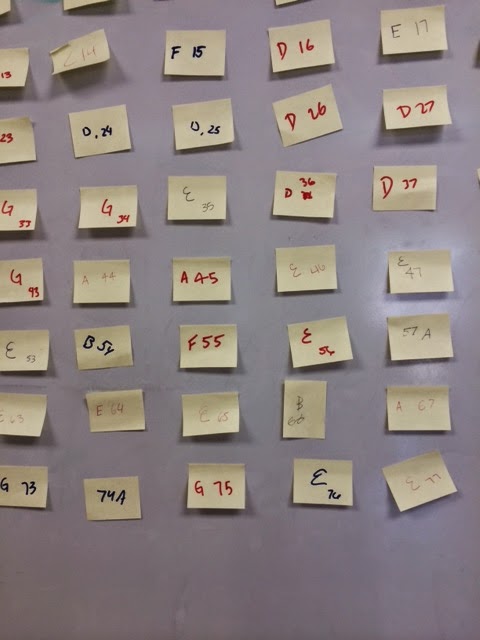 I keep seeing on facebook that we have to take chances in teaching and I have been taking quite a few this year.  Most of them have been successful!