Twitter and My conference experiences:
I have had to opportunity to attend 3 conferences recently:
ATOMIM – in Maine
PCMITLP – Park City Math Institute Teacher Leadership Program in MA (town right next to me)
ATOMIC – in CT
Twitter has shaped how I experienced these conferences.
For ATOMIM – I found out about it on Twitter.  I knew Dan Meyer @ddmeyer and Tina Cardone @crstn85 were both speaking.  Dan was the keynote speaker and speaking to a large group.  I went in and grabbed a table up front.  There was one woman there and  I introduced myself as Jennifer and that was her name, too (@michaelismath) (lots of Jennifers in this story).  We were checking each other out, had she heard Dan before, did she know about this or that.  Was she on Twitter?  Yes, she was.  Did we follow each other?  Yes, we did, how cool.  She knew Denis @mathdenisnj from NJ and twitter and he was joining us for another session.  I already followed Dennis on Twitter too, so no need for Jen to introduce me.  (Edited: I had Denis as Bob Lochel from Philly, sorry Denis) Did the rest of the conference and met up with Tina afterwards.  She was meeting Tracy (@tracyzager) from Maine and twitter after to chat, would I like to come?  Of course, I follow her on Twitter and it would be nice to meet her in person too.  She brought along her friend, Shawn (@towlemath) from Maine.  I did not follow Shawn but I added him to my list.  We had some great conversations.  Turns out Shawn would be traveling to CT for the conference I would be speaking at in CT.  Great conference, great day, great connections because I felt so comfortable.
Along comes PCMITLP.  Again this happened through Tina.  I applied and got accepted to attend this two day weekend conference.  I had heard about PCMI and its three week summer conference for teachers to do some challenging math all three weeks.  This seemed like the perfect taste so I was excited.  I invited my colleague, Kathy (@kd5campbell), who is on Twitter now too.  Only 35 people were allowed to attend to keep it more intimate.  We would be working together the whole weekend.  When I walked into the room, it was so nice to know so many people already – Tina, surprise – Shawn and Tracy from Maine, Heather (@heatherkohn) from Marlboro, MA, Wendy (@wmukluk) came in from NY (all from Twitter).  And, Beth (@bethdore) was there.  She was my student teacher a few years back, so it was nice to connect again.  We got to work doing some problems that are best explained here in Tracy’s post.  Our groups kept changing and we got to network.  Most people were on twitter so I started following them.  I met Cortni (@cortnij) from CT and turns out she would be at the next conference I was going to in two days in CT– ATOMIC and so was...Shawn from Maine.  Great, the fun would continue.  Overall, it was a great atmosphere and experience and I loved it. 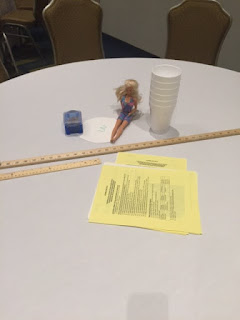 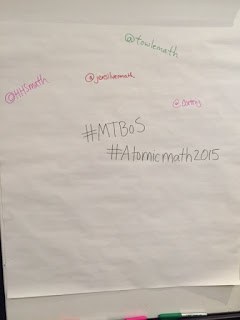 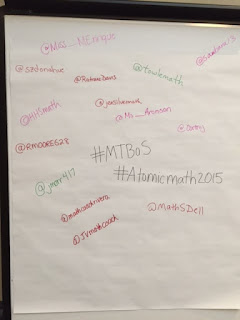 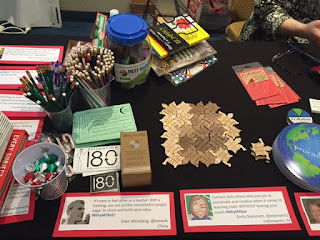 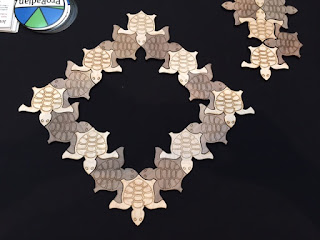 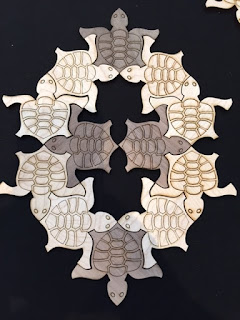 Kudos if you made it this far!
Posted by JFairbanks at 5:46 PM