We started our second part of the unit with Vectors.  This time I started with a few notes in the PPT and direct teaching.  I wanted to define it and give them the notation before getting to the board.

We started at the board with the notation and drawing. 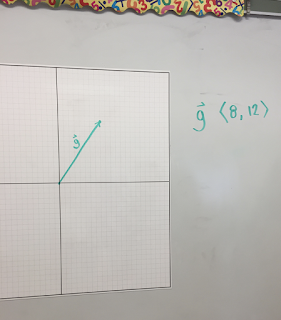 I asked them to find the magnitude.  Some did the distance formula and some did Pythagorean Theorem. 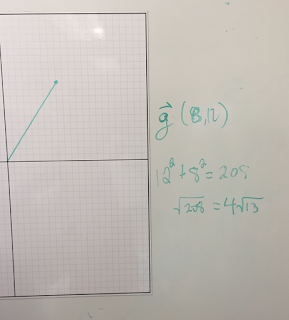 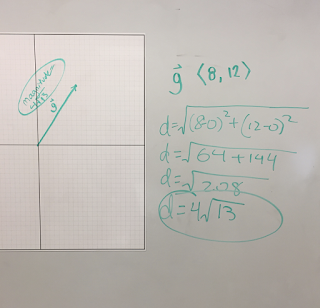 Next: I asked them to write, then draw vector h, given the following coordinates. 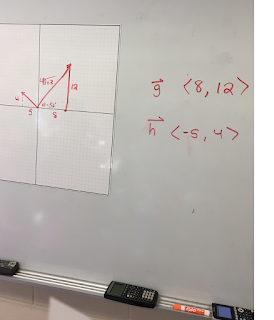 I asked them to think about how they would add these two vectors.  Most kids did not know.  Some connected tip to tip in an upward vector.  A couple of groups did the algebra first. Note: I didn't tell them anything about adding.  The groups that added the components, I then asked them to draw this new vector.  One group had a number answer.  I told them a vector plus a vector would be a new vector, not a number.  Once, the couple of groups turned to algebra, the other groups followed, so they call got the new vector drawn but still couldn't see it visually.  They couldn't see where it came from, so I drew in both the triangle picture and the parallelogram method. 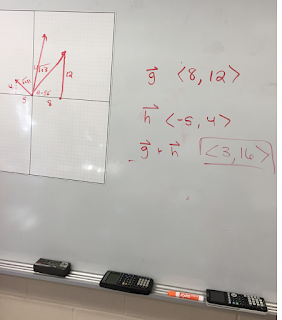 I called attention to one board and drew it in blue: 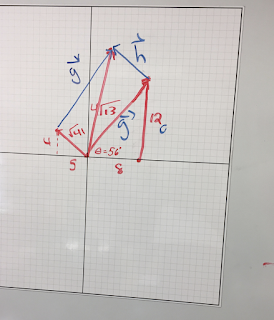 Then, I gave them two vectors, asked them to draw the first only and how did they think subtraction might work.  They turned to algebra first and then drew it in.  I asked them to find the bearing to this.  They struggled with seeing the right triangle because it was too long and skinny (1x18). Finally, they got it. 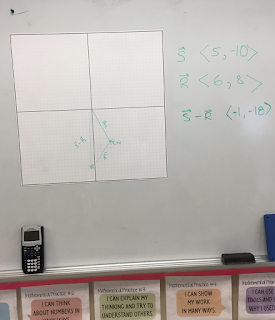 We returned to our desks to get the vocab word: Resultant vector and to draw in the triangle and parallelogram methods.

Posted by JFairbanks at 5:30 PM