On my second day of Geometry, I had the students up at the boards for #VNPS to learn about points, lines, planes, angles, rays.  I read this as they drew and wrote notations.  I was going to have them shift and look at others to correct, but we just had the groups correct their own.  It was great discussion.  I asked them to draw a line, they drew a segment.  After we realized it needed arrowheads to be considered a line, I asked them to write the notation.  They wrote it with a segment on top.  They realized they had to have the arrowheads on this as well.  I am hoping the making of mistakes and fixing them along the way will make it stick better than me saying, "This is how you draw a line. This is it's notation."  It took longer than I anticipated.  I wanted them to return to their seats and then write it in their notes, but instead, I asked them to take out their phones and take a picture and for homework to write it into their notes.  They could take a picture of their own group's work or another.  It was fun to see the Geometry Paparazzi form around the neatest work and snap pictures. 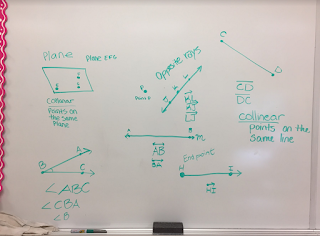 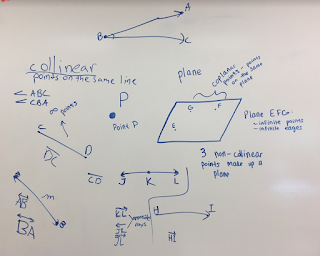 Thanks for reading.
Posted by JFairbanks at 2:11 PM