I am continuing to read Tracy Zager's book Becoming the Math Teacher You Wish You'd Had and am on "Chapter 9: Mathematicians Use Intuition", page 237.  It talks about doing Estimation 180 problems.  On page 238, it concludes, "Ultimately, what we really want them to do is to take this habit of mind and transfer it into their problem solving."

In my Foundations of Algebra I class yesterday, I was growing frustrated, losing my patience, feeling like I am not reaching them, they are not getting it.  Then, I read this and I regained hope and realized I am making a difference after I remembered our great discussions.

In class, I always start with the same opening structure, one Estimation 180 as a class, two Solve Me Puzzles as a class, and one Visual Patterns with all students at the boards in groups of 2 (there are 9 kids in class, one was absent).  Then, we get into our lesson.  Yesterday it was a paper card sort matching linear equations, graphs, words, and table of data.  But, let me back up.  The openers were great, the card sort, not so great.

We have done Estimation 180 since the beginning of the school year.  The kids question it - "Why do we have to do this?"  But, then sometimes, they really get into it.  And, whether they know it or not, they are getting really good at it and the discussions have been getting better and better.

I invite one student per day to come up to my computer and run through the google doc with the conversation to poll the class for their range of too low and too high, then their guess.  The person at the computer gets final say as to the estimate entered.

Two days ago we did Estimation 180 Day 75 that asked "What is the weight capacity of the hospital elevator?'  There was some talk and some guesses.  We first had to decide what we were more familiar with - pounds or kilograms.  We decided on pounds.  We discussed how come it had to be so big.  We ended up guessing 3500 pounds and the answer was 5000 pounds.  The kids were shocked it was so high. 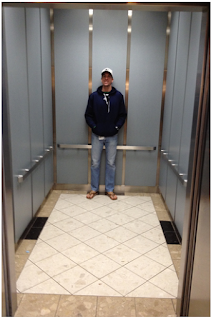 Yesterday, the Estimation 180 Day 76 question was "How many passengers can ride in the hospital elevator?"  with this picture given:

Interesting conversation started right away.  I was trying to capture it all.  They knew the number 5000 pounds.  They said "Well, the average person might weigh between 140-180 pounds."  Another said, "It looks like 3 people can fit across the back."  I, myself, was thinking weight-wise, so I appreciated the visual idea of area.  Here we had some thinking about weight and some visualizing the space and area.  They decided that if you did 5000/100 pound person you would have 50 people, so 50 would be too many.  The students ended up guessing 24 because they thought it looked like 3 people could fit across and 8 people deep.  I loved it.  Great discussion, thought process, class coming to a good range and conclusion.  The answer is 33.  We were pretty close and they recognized that - "oh, that must mean there are 11 rows instead of just 8."

In Tracy's book, p. 239, Tracy is speaking with a teacher continues talking about the estimating process and says "we get to take that experience with us into the next problem."  The teacher says, "That makes perfect sense.  And that's why my students have so little intuition.  They've never been allowed to prove anything to themselves: they've just been told." 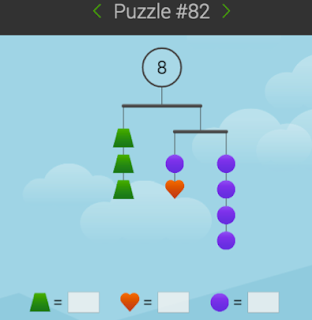 Here, I am not turning these into equations.  I know you can.  I feel that would turn the kids off to it.  Throw an x in there and they will shut down.  In Tracy's book on p. 239, she states, "It's true some special education students need more repetition, so what if we gave them extra opportunities to make sense?"  That is what I am trying here.  Take this picture and make sense of it, without throwing in the math and the variables.  And, they are doing awesome with it.

As you can see, our discussions have been long and these are just 2 out of the 3 openers but they are so valuable and worth it.  My third was this Visual Pattern #27.
Again, I screen shot it and add it to my powerpoint.  They are given the first three steps and asked how many total squares are in Step 43.  It is always Step 43.  They know now that this is so they don't write all the way out to step 43.  They do enough to figure out the problem.  At this point, I have vertical whiteboards all around my room, so they get up to the board in groups.  Today I allowed them to pick their groups, but normally I would use Visual Random Grouping with flippity.net  I am kicking myself that I didn't take pictures of their work, but I remember their work well enough to replicate it in my own handwriting to share with you.  They have been working on these for about three month now.  Again, some love them, some hate them, a couple are really good at them, but we are all making progress.  Some draw lines to represent rows and columns, some color code, some use just numbers, some draw the actual shape (for example, a football helmet in a past problem).  They are allowed calculators, too.  Give it a try.

Imagine this is in student handwriting.  It is student work.
At the front board, I had two students do this.  They are two who are really struggling with just getting started at any problem, but they did try and they did see something within the problem:

At the back board, I had three students come up with this.  They like to draw.  They always see it visually.  They love to color code.  They often will look for the number that it is increasing by.  If you look at the top, they are just doing the shaded blocks increasing because they already figured out the unshaded blocks.  There is always great discussion in these types of problems as to whether they should add the two numbers or multiply them.  Some are starting to see the difference. These students are. 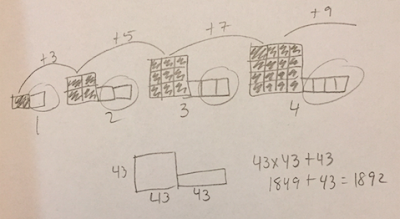 This next work is from one student working by herself.  She used to draw pictures but once we starting looking around the room and comparing work, she realized she didn't have to really draw all the boxes.  She is one who is struggling with when to add or multiply. 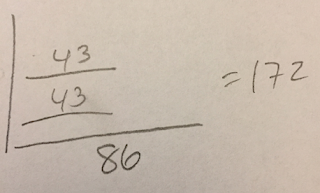 And, this last student worked by himself.  He wanted it to be all him today.  He has gotten most of them recently, while working with a partner, but he wanted to show us, he could do it all by himself.  He is a man of few marks and uses lines for rows and columns.  He gets so excited for these problems because he is finding sucess and I see his confidence growing (All that makes it worth the time we are putting into it.)

When they are all done, I don't just share the answer to tell them if they are right or wrong and they know that by now, so they have stopped asking.  I ask them to look around the room and see what they notice.  I want them to learn there is often more ways to do a problem.  There are more ways to represent a problem.  I love the freedom they have on the whiteboards to spread out over space and the ability to erase gives them more confidence to get started.

Then I ask the students to share their process.  The above was the ordered they shared in.  As the students noticed there were two of the same answer, so the two other groups figured out they must have done something wrong.  The first group realized they forgot to account for the gray blocks and the girl by herself recognized she didn't go up far enough.  They are self correcting.  They are self analyzing.  Again, I am not turning them into equations because that would stop them.  They are figuring it out with their own sense making.

In Tracy's book on p. 240, it discusses this from Andrew Gael, "A lot of professionals are very good at scaffolding and creating step-by-step processes that lead to sucess for special education students.  Something I've been advocating for is that we don't scaffold out the mathematical thinking that goes into solving a math problem."  On page 241, Tracy continues going back to her master's program at U Washington and her professor Ilene Schwartz talking about the word "scaffold" - "imagine a building under construction with scaffolding all over it. The whole idea is, at some point, you take the scaffolding down, and there should be a building there that can stand on its own."

I could dive in and give my students a method, a process, an equation, but instead, I am just giving them an opportunity.  I am giving them an opportunity to make sense of it themselves because that is so much more powerful.  It is the experience they can take with them into the next problem (like from the beginning of this blog post.)  I really really hope they happen to have a lot of patterns on their state test next year, because I think they will rock them.

Thanks again Tracy for reminding me to stick with it.  It is paying off day by day.

Posted by JFairbanks at 5:00 AM