Ahhh, food...it makes socializing better and easier.  At TMC16, there were social events planned for the evenings that involved food and then of course, we had our meals to socialize at as well.  Our school doesn't allow food anymore which makes me sad because it really can bring people together.

Friday night, Desmos held a Happy Hour at the Republic with light appetizers.  Kathy and I were milling around with Allison whom we met at the airport because she came in from Brookline.  Marissa joined our table and we got to know each other.  We checked out the menu and the first thing I noticed was "Cheese Curds".  At first, I was thinking, "Gross" but Marissa said they were yummy, so we ordered them.  They were delicious.  Kind of like a less breaded mozzarella stick and the cheese isn't mozarella.  There was a different sauce too, so good!  I had a juicy bison burger that was great as well.

Saturday, for lunch, we went to Jimmy John's.  It was a short walk from campus on the corner.  Kathy and I thought it was just a Mom and Pop shop.  Allison and Carol Munro @chieffoullis joined us.  Carol said her daughter was working at Jimmy John's back at home at the same time.  It was a sandwich/sub show and it was yummy.

Saturday night was MY FAVORITE PART of TMC16.  We went to Pizza Luce.  I love any and all pizza.  This dinner was intended for first-timers to TMC16 as well as some members who have come for a while.  I was an early person in and got to pick my table.  I almost sat at the table NEXT to Sam Shah @sam_shah, but I had been really wanting to meet him and to get to know him better, so he invited me over, yippee!  Kathy found our table and she invited Connie @CHaugneland over.  We had the coolest table if I say so myself.  We jumped into the menu and Sam had been there before so he suggested some for us.  We learned he is a vegetarian who doesn't like vegetables.  He likes cheese and carbs, so he basically ordered a bowl of cheese.  Not really, it was a vegetarian pasta dish, but I didn't see much pasta in there.  He loved it though.  We all shared a delicious watermelon salad.  Kathy, Connie and I settled on two pizzas - The Athena and the Spanish Chicken - all wonderful.  We almost got the cheesecake but then I learned it was coffee and I don't like coffee so we went with the chocolate peanut butter brownie sundae that was fabulous!  It was huge and so big for all of us to share.  The conversation never stopped.  We learned we all had a ton in common.  Sam wanted to find a trait that each of us had that no one else had - a fun way to get to know each other.  Mine was I love fishing.  We shared some fishing stories, but I was alone in my love of it.  Connie has never been to a drive in theater even though there was one near her growing up.  Kathy loves tennis.  I can't remember what Sam's was.  I have been wracking my brain.  I think it might be that he is a vegetarian.  Then, came the love the musicals!  And, young adult novels.  Sam lives in NYC, Connie lives in TX and we are in MA.  It is about 3.5 hours for us to drive to NYC to see shows on Broadway.  We also have many shows around us.  We compared stories.  Yes, Sam has seen Hamilton (jealous!).  He recommended a show to us....shhh, don't tell anyone...Dear Evan Hansen.  I want to go see it now, but tickets aren't available until November.  Thanks Sam and Connie for making us feel so welcome and part of this great math team. 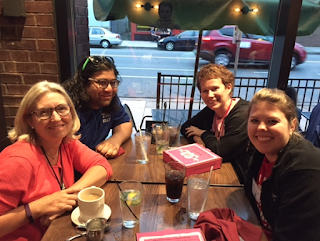 Here are some 3D printed toys from dinner.  From one direction, they look like circles, turn it 180 degrees and it looks like squares: 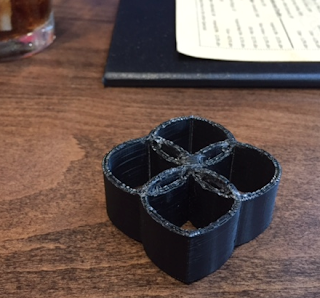 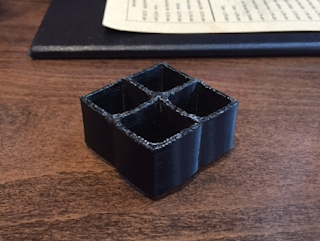 Sunday afternoon, Kathy, Marissa, and I went to Sewards.  Before lunch, I asked Sara VanDerWerf if she knew about it.  Apparently there are a lot of them and they are know to be "granola".  Yes, they were.  The wait was long and it was pricey, but it was good.  I had a salad and a fruit bowl with a yummy smoothie.  Kathy had a huge sandwich and fruit bowl.  And, Marissa had the "Earth Breakfast" - looked like an omelet with a mountain of broccoli on top.  She said it was good.

Sunday night, Trivia was planned, sponsored by Mathalicious (Thank you!)  I love trivia and am super competitive but we lost.  We were going to have some free appetizers, but we thought we might get dinner first, so Marissa talked us into trying Ethiopian.  People had been there and said it was really good.  Let's just say, "It's not just a meal, but an experience."  We had a huge plate with a sponging Naan bread on it and lots of different globs on top. Then we had naan bread on the side that you rip off and use to scoop up the food.  Marissa made the mistake of asking for a plate and he said we already had one.  So, it got a little messy.  I will say it was flavorful.  Not sure I will go back and I will say I was happy to have the appetizers at trivia later. 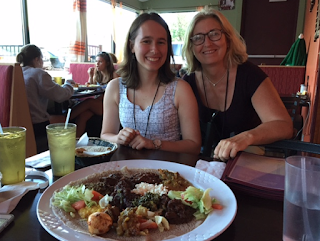 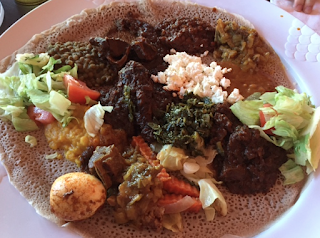 I may as well tuck Trivia in this spot.  We had myself, Kathy, Marissa @viemath (from Chicago area), Norma (from MA) @normabgordan, Jess @jesrice, Maggie @maggietenneyson, Jeremy (from MA), @greenblock, and Allison Hansel @ms_hansel (from MA).  Our name was TMC Virgins.  We did great in the first round of Movies - listen to and watch one line of a movie and name it.  We got 10 out of 10.  Second round of Name that Calculator - tough, we didn't do so well.  Third round "Culinary Math" - things like how many flavors were in the original life savers package or how many rat hairs are allowed in 200 grams of peanut butter?  Lots of interesting stats/data/facts can be found at the FDA website.  You might NOT want to look.  We didn't do so well again.  And, the last round was Random Crap, we continued to stick, but at least the pressure was off and we could partake in the loud singing led by the front table group. 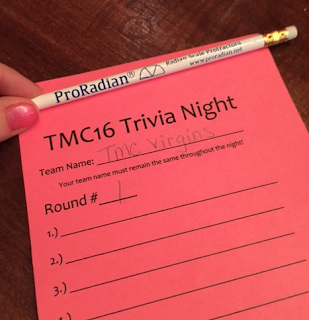 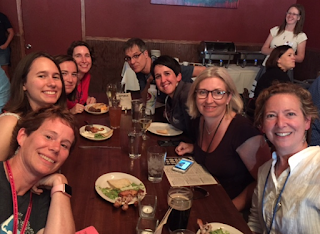 Monday for lunch, I found myself heading back to Pizza Luce.  I hooked up with our group of four - Jennifer, Keely, Kerry, and Tony from Montana who were responsible for hosting the trivia.  I also went to Kerry and Tony's session so it was fun to catch up with them and get their take on things.  I also got to try a new pizza, The Bear, with lots of meats on it, so delish!

Monday night, Kathy and I went to Acadia.  Nothing formal was planned.  Well, they did try to organize a trip to dueling pianos but we learned it was closed on Mondays - big bummer.  We went in and saw three guys from TMC.  We joined them.  I already met Jim at my morning session @MrDardy.  We heard Brian share a My Favorite @TheMillerMath and Alex Wilson @fractallove314.  It was also $5 snack hour.  We got our cheapest, yet yummy dinner of more cheese curds, fish tacos, and beef quesadillas.  The conversation was so great.  Here we were after 3 long days of amazing sessions and we were still having great math conversations.  We further discussed Vertical Non-Permanent Surfaces and Visible Random Grouping.  I continued to learn more and more!

On Tuesday, our last session was a great 2 hours of My Favorites followed by The Song and The Announcement for next year: TMC17 will be in Atlanta, GA!!!!

We checked out and then squeezed into Marissa's Mini Cooper with three people and three people's luggage.  We traveled to the Mall of America.  We grabbed lunch at Twin City Grill.  We decided we didn't want a chain food restaurant but something local.  This fit the bill.  Yes, there were cheese curds on the menu but we didn't get it.  I had Fish and Chips that was Walleye, just perfect finish to my TMC meals.  Thanks for the ride Marissa!

Food helps with our memories!!!!  Thanks MN food.
Posted by JFairbanks at 4:14 PM