Do you know what a Breakout Box is?  I did not.  A colleague was talking about it, but I still didn't get it.  Then, we were having a teacher PD with it but I was going to be absent due to Good Friday.  The teachers got to "do a Breakout".  They were talking about it at lunch on Monday.  I still didn't understand what it was but was told I would love it because it was right up my alley with puzzles and stuff.

So, I went home and started checking out www.breakoutedu.com .  I was hooked!  I was like a mad scientist.  I dove all in.  When you go to the site, you have to create a password and you see all the lessons people have created.  You can purchase the whole breakout kit with box and locks or they give you a list and links to amazon.com and you can buy it separately.  I started making a list of materials I would need.  I wanted to get mine separately to see if I could do it a little more cheaply.

Okay, so what is it?  Well, I still haven't seen it done in person so I only know what I have researched, but it takes the idea of an Escape Room and makes it portable.  Teams are given clues to figure out to help them open about 4-6 locks on a box.  I was wondering - well, what is in the box?  And, that is just it.  It isn't about what's INSIDE the box.  It is about the journey!  There is often more than one box.  One envelope gives a puzzle that will be a clue to figure out a number or letter or directional lock combination.  There could be a paper cut up into puzzle pieces written on with invisible ink.  You could use styrofoam cups and place value of numbers to figure out bigger number answers.  You could use a flashdrive, a code on an ipad, QR codes....The possibilities are endless.  It is usually timed - 45 minutes.  Teams try to breakout within that time.  If they do unlock the box there are signs inside like "We Broke Out!" And, they did it.  If they don't get to break out in time, there are also signs like "We didn't do it this time."

That Monday, I signed up, watched videos of them being done.  Read lessons that are all organized and shared on the site.  All different subjects, all different levels.  I was looking at all kinds, not just math, to get ideas on how to make up clues.

I started following #breakoutedu on Twitter.  I joined the Facebook group and they are great.  So many people on there that your questions are answered right away.  Lots of organizing tips or new puzzle ideas are given.  Many people were reporting having difficulty with the directional locks.  I did buy those, so I will be careful to use shorter codes with them.

Again - I was a MAD scientist - so much goodness to wrap my brain around.  I was all consumed.  I could do one for Algebra 1, Algebra 2, our girls' weekend, my Church Youth Group mission trip group.  I was drawing, using arrows, searching, creating!  I love the creating process.

Yes, there are plenty of premade games to use but I love designing my own.  I decided not to do one for girls' weekend, which is this weekend and instead concentrate on my Youth Group one which is next Thursday.  So, I am blogging about it before I have tried it.  I hope I don't jinx myself but I wanted to record all my thoughts before I actually do it.

We have 45 kids going on the mission trip to West Virginia, so I wanted 2 sets of breakout boxes.  The suggestion is about 10 kids per box so they can all have a part.

I don't want to share all my clues and hints here because there might be students reading.  But, some involve Bible quotes, The Commandments, our own church trivia, etc.  I have 5 locks on each.  I loved thinking up the clues, mapping out how they would be connected.  I have a smaller box with one lock on it they need to open to get to more materials for clues.  I made this one a quicker clue (hopefully).

I highly suggest checking out the site.  Don't be afraid to sign up so you can actually see the lessons.  More and more lessons are being added.  Some of the lessons are in the Breakout format, some are in google forms.  People are created.  People are sharing.  Sound familiar #mtbos?

Here are my boxes with the locks and the picture frames are part of the clues. 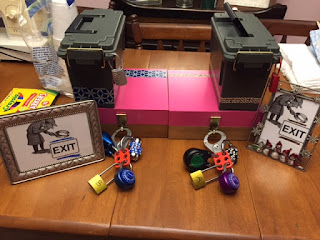 I also love going on a hunt to find materials cheaper than Amazon.  I bought the dark green containers at Walmart for $3.88 each.  They are supposed to hold ammo.  I got the pink wooden boxes at Michaels for 70% off so $6 each.  I bought the hasp and my husband attached those to the boxes.  I did by the 6 hole hasp and the invisible ink pens and black light flashlight on amazon.  I had the picture frames.  I bought the locks at Lowes and the dollar store.

This has the cut up paper with invisible ink on it with a clue and the styrofoam cups are a clue as well. 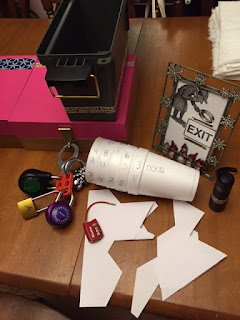 Here are my signs if they break out: 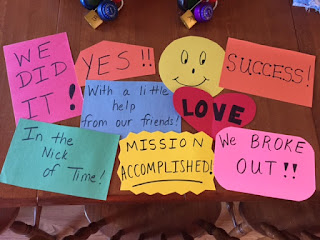 I am not going to lie, it took a lot, lot, lot of time, but I loved it.  I organized my plan.  Bought all my supplies, typed up all my clues, some of them were QR codes, so I had to create QR codes, print it all out, put some in envelopes, make the signs, re-code all the locks.  I did realize my 3 letter Master Lock was not able to be reset so I had to add another layer to that puzzle to work with the specified code.  I love color coding, so one box has blue duct tape and blue locks.  The other one has many different colored locks and I found cute little tape that has brown keys on it.  So, I have a blue team and a brown key team.

I also learned what a Red Herring is.  I kept hearing about it through my research.  I have 2 in mine but I am not going to say anymore about this, you can look it up :)

For the future - my math classes.  I am planning on doing this in Algebra 1 and 2 as a review for our final exams in June.  I have given more thought to the Alg 2 one.  I am thinking about a Haunted Amusement Park (that is another thing, you sort of have to have a back story/theme to go with).  I could do a trig equation with the ferris wheel, a polynomial question with the rollercoaster, a quadratic equation with the squirt of water and a carnival game.  Oh, the possibilities!

Here is a cool graphic someone posted to Facebook about Breakoutedu: 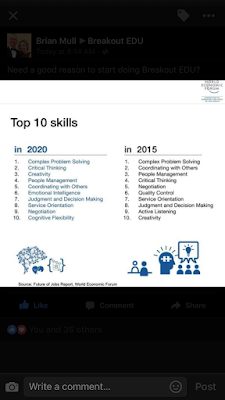 I did ask if people could present on this (like at NCTM).  The answer is yes as long as no one is making money on it.