A quick blog post.  I taught bearings in Accelerated Algebra 2. They did bearings last year in Geometry and didn't really like it from the moans and groans when I announced it yesterday.  We are doing a unit on trig with Law of Sines and Cosines and bearings as well.  We do one day of bearings.  I wanted to see what they remembered as well as make them see bearings as necessary.  So, I opened with this: Edited to give credit to Dan Meyer for blog post. 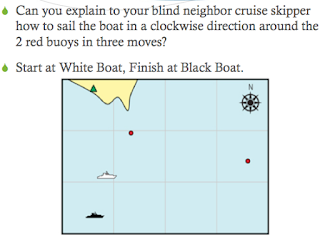 I had one student close their eyes and the other could see this projected on the board.  They had to describe it so the student could draw it.  It was a struggle but there was some interesting conversation.  Some referred to quadrants.  Some used left and right.  Some used North, South, East, West.  Eventually, we pulled out from them a direction, a degree, and a distance.  Yeah!

Posted by JFairbanks at 3:46 PM