T'is the Season for Logs...Clothesline Style

I love logs and I love teaching logs.  They are all made more fun with crowdsourcing from Twitter with:
Julie using Zombies as opener to create a need for logs
Kate's discovery activity for Log Laws
Wendy recaps her love of logs
Andrew writes about Clotheslines here with an idea from Chris Shore

I figured I would bring the Clothesline idea into high school in my logs and exponential unit.  I had fun putting together logs and exponents onto a number line.  That would be a fun activity for the kids.  It really made me think.

Log and Exponent Clothesline    I think and hope I fixed my typos and mistakes.

My husband used an old soccer net and screen spline to make this clothesline.  Of course, I added some pink duct tape:  (My Algebra 1 class used it to Limbo) 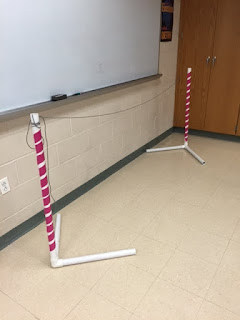 I made my number line on paper first.  Then, I chose to have 16 cards per group of 4 kids.  I wasn't sure if I wanted to use 2 clotheslines and have a competition between teams, but I decided on 1 clothesline and just compete by time.  I made 6 sets of cards.  The first set is a practice set - no logs or exponents, but still challenging with fractions, decimals, and radicals.  This would allow the class to see how it is done.  It also gave us a quick time to aim for.

I used 4x6 index cards and wrote one problem on each.  I added symbols to each group so if they got mixed up, I would be able to sort them after.  I told them they couldn't write on the cards so I could use them again but they could use the board if needed.

I did this activity on the day before Christmas break.  I returned a quiz and we went over that, then we did this for the rest of the class.  It would work well on a review day when the rest of the class might be working on something else and you call up one group at a time.  I had one group up front and the rest were the audience, planning their strategies for attack.

I teach Accelerated Algebra 2 during period 4 and 5, so I left the time results from period 4 on the board and we challenged period 5.  Rounds were the same in each class so we could compare.  At the end, I asked if anyone wanted to try it individually but no one wanted to. 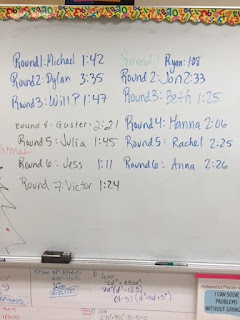 I asked one group if I could record them.  They happened to be the only group to bump it and knock some of the cards off, but they laughed and had fun.

I used an online timer and let the kids start sorting.  I stopped the clock when they were done and checked their answers.  If they had something wrong, I took those cards off and re-started the timer and they fixed it.

One thing I keep stressing is that a negative exponent doesn't make it a negative number.  Some kids were still doing that.  The fractions with small denominators were hard to put in order :)

Overall, the kids that were sorting were having great conversations and working well together.  I think we all enjoyed it.

Posted by JFairbanks at 7:06 AM