I saw someone post on twitter that if you asked Siri "Planes Overhead Now", it would give you the following: 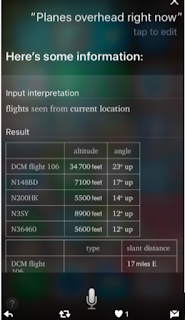 I was to meet period 6 before period 3 when we returned from vacation, so I decided to try this in class and see what happens.  It is accelerated Algebra 2.  They had right triangle trig in geometry last year and we are just starting trig now.  I wanted to see what they could make of it.  I didn't give them many instructions, just to draw it.

This is what I got:
Group 1 - used variables and came up with an equation to create a table and then graph.  Very formal. 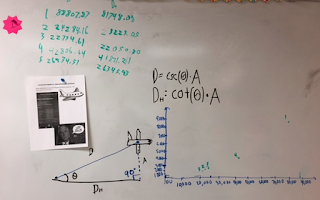 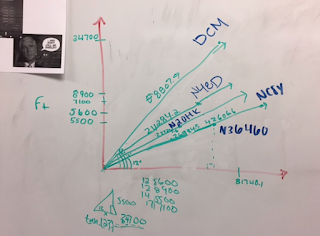 Group 3 - Started out with just drawing the angle degrees, then guessed on where the dots for the airplanes would go.  I helped direct them and asked if they could figure out how far away from you they would be.  I did tell them they could use their calculators and at that point, they hadn't needed them, but now, they were "ooooh, that's why we would use our calculators."  They knew their final product wasn't quite drawn to scale but better than they started with. 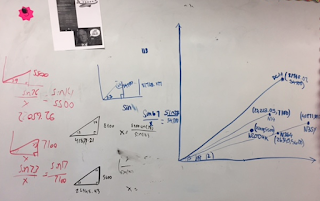 Group 4 - Was similar to 3 in that they started with degrees, rays, and dots.  I encouraged them to add some numbers to their axes.  (I didn't tell them they had to put it on a coordinate plane, but they all did.) 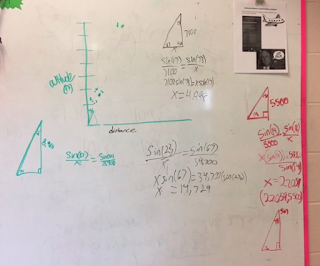 Group 5 -I took this picture before they were done.  They didn't have numbers at first, they were starting to figure them out. 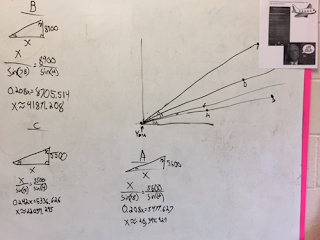 Group 6 - I am not sure why I let them off the hook so easily. 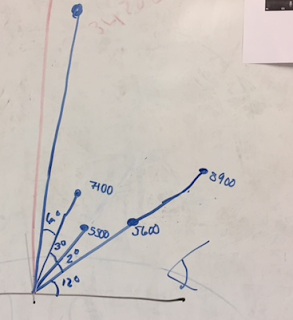 Group 7 - I like this.  They first drew a lot of smaller triangles and then put their information as points on the graphs without drawing all the rays (similar to number 1). 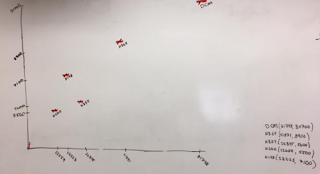 Group 8 - They color coded.  I love color coding.  Some groups didn't have any number labels on their axes or names on their airplanes, details, details. 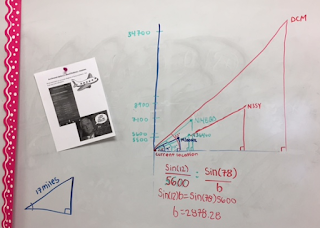 I liked it.  It was a good conversation started.  Some people were using Law of Sines.  Okay, but they didn't need to because we had right triangles.  We discussed the distance away being the horizontal distance.  Some groups found their hypotenuse and used that though.

We live an hour West of Boston, so I was imagining all these planes departing Boston's Logan Airport.  I was wondering if any of the students might draw planes to the East and the West but they didn't.  I am going to do this again with Period 3 on Friday.  We will see their take on it.
Posted by JFairbanks at 12:33 PM